On Saturday 13th April 2019 I sent this email to enquiries@greatermanchester-ca.gov.uk

Recently I enquired about whether the GMCA had a petitions scheme.  After a short unexplained delay in replying (due to the seeking of legal advice) the person I emailed said that they could

“confirm that the GMCA does not have a petition scheme as the current legislation does not apply to Combined Authorities.”

I am certain the Mayor agrees that there are lots of things we are not legally obliged to do that we should (for example, helping the aged and infirm cross the road safely or instituting and obeying an ‘only-fly-when-there-is-no-viable—alternative’ policy to choose two examples at random).  I am also certain that he wants people to be able to express their grievances through the traditional channels, including petitions. This is, after all, the new age of Listening.

I also note that other combined authorities in the UK have gone ahead and gone beyond their minimal legal obligations.  For example, Cambridgeshire-Peterborough (I added the red ellipse for dramatic effect) 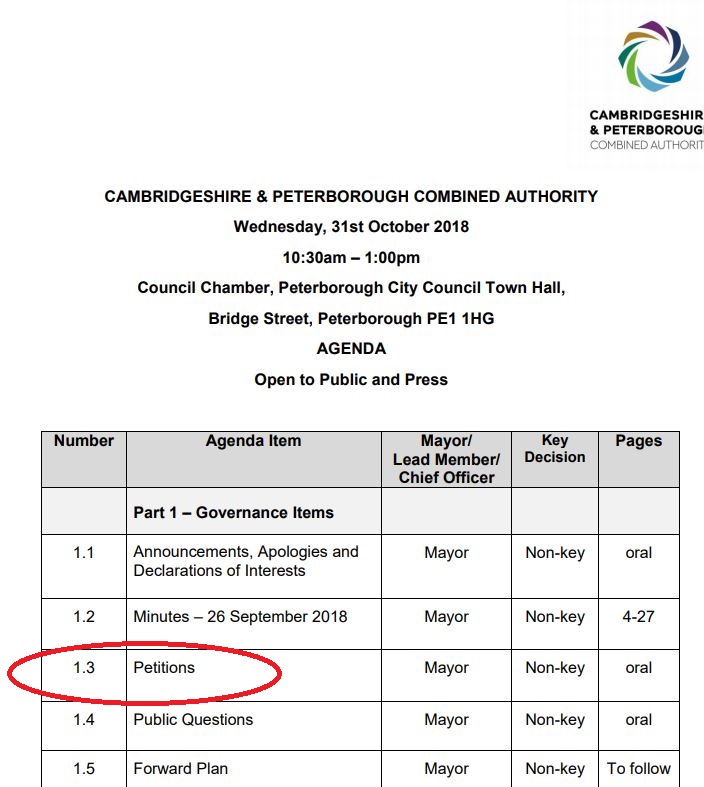 It turns out the Liverpudlians have one too, as best I can tell-

And the North of Tyne crew.

I stopped going through the list of Combined Authorities at that point….

So, all this leads to the following three requests for information under the Freedom of Information Act 2000, which the Combined Authority is, thankfully, covered by.

ONE I would like copies of all correspondence between Andy Burnham and other GMCA actors (I mean this in the academic sense of people taking action, not in any pejorative sense) around petitions scheme

TWO I would like copies of the minutes of all meetings at which a petition scheme has been discussed.

THREE If, as I suspect and fear, there is no correspondence and no minutes, I would like a statement from the GMCA about when it intends to get around instituting a petition scheme. If it doesn’t, I’d like a statement as to why not.
Please consider this a request under the Freedom of Information Act 2000
Marc Hudson