When September Ends isn’t just the title of a great song by the US punk band Green Day. 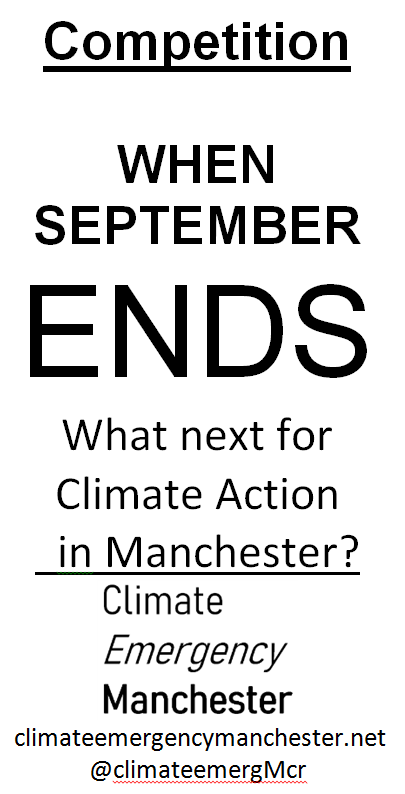 It’s also the name given to Climate Emergency Manchester‘s new competition (both written and video) which challenges people in Greater Manchester (and yes, that is one of the eligibility criteria) to ponder the questions – what next for climate action in Manchester? How do “we” build on the momentum, and sustain the morale built up over the last few months? How do we make sure that the summer is well spent, and that when September ends, the movement is in even better shape, better connected, better-skilled than it is now? What is it that we need to do in the coming weeks and months? And who is we, anyhow?

The competition closes at midnight on 6th June (i.e. one minute before the 7th begins)
Terms and conditions

The competition asks you to write an essay or short story of up to 1000 words on the theme of “When September Comes; How the climate movement in Manchester maintained its morale and momentum thru the summer of 2019.”

There is a separate competition, with the same criteria for a video, to be uploaded onto a public platform (youtube, vimeo, whateves) that is up to three minutes in length.

You can write/video from the position of the future “We did this, then we did that and it went fab” or “we should do x, y for it to turn out fab.” Entries must be in English.
Person/people submitting must live in Greater Manchester
More than one entry is allowed
There is no barrier to age or nationality

Entries promoting/expressing homophobia, misogyny, racism etc will be ignored. As will entries that advocate violence against human beings or other animals.

Entries must be submitted in plain text (no formatting) in the body of an email (no attachments) to
climateemergencymanchester@gmail.com with the subject header “When September Comes competition”

For the video competition, send us a link.

In both cases,  include your name and two means of contacting you from the following
Snail mail
Email
Twitter
Phone number

Entries will be posted anonymously on the Climate Emergency Manchester website unless you explicitly say you do not wish this to happen
If you do not wish your entry to appear on the website, it will still go forward in the competition If it wins the competition, we will ask you if you want it to be published. If you say no, we will go to the next choice of the judge and you get nowt. It’s a cruel world, after all.

The competition will be judged, anonymously, by an old white Professor male (he’s agreed) and at least one other person more with the zeitgeist.
Judge’s decision final, no correspondence entered into.

Winning entries will be announced on this site, and hopefully at some event (we haven’t got that far yet) by the 13th of June or so.

Prizes? You want prizes?  Well, the evil capitalist who owns the Sandbar has promised pizza and beer/non-alcoholic drinks for the winners.  Watch this space. Oh, and you’ll get the undying gratitude and adulation of the climate movement in Manchester for having helped it do some strategising…

1 thought on “Competition: What next for #climate action in #Manchester? #whenseptemberends”