There are (at least) two big dangers in pressing political incumbents (calling them leaders seems too generous) to declare a climate emergency.
The first is that they declare a climate emergency and then continue very much with business as usual (hello Leeds, Bristol and – most recently – Stockport). That is, they dress up what they are already doing as somehow adequate to the scale of the crisis we face. Manchester City Council is doing this, and we fully expect them to do it more in the coming months. It is entirely likely that they will in fact declare a “climate emergency” while sticking to their grossly inadequate current “plan.”

The second danger is not so much at a local authority level (though if you’ve seen The War Game,  Punishment Park or Threads you may disagree). It’s more at the national and international level. Say it’s a climate emergency. Well, in that case, game on for geo-engineering, surveillance/rationing and more of the sort of eugenics/racism/victim-blaming that has been the norm for the last however many centuries, only on steroids.  As Arundhati Roy recently noted

And now, irony of ironies, a consensus is building that climate change is the world’s single largest security challenge. Increasingly the vocabulary around it is being militarised. And no doubt very soon its victims will become the “enemies” in the new war without end.
Calls for a climate “emergency”, although well meaning, could hasten the process that has already begun. The pressure is already on to move the debate from the UNFCC (United Nations Framework Convention on Climate Change) to the United Nations Security Council, in other words, to exclude most of the world and place decision making straight back into the den of the same old suspects. Once again, the Global North, the creators of the problem, will see to it that they profit from the solution that they propose. A solution whose genius will, no doubt, lie deep in the heart of the “Market” and involve more selling and buying, more consuming, and more profiteering by fewer and fewer people. In other words, more capitalism.

So, are campaigns like ours an exercise in being useful dupes for Evil Overlords plans for Domination.

Is this, “objectively” an emergency for our species? Are we shooting through the Holocene into the “Anthropocene”? 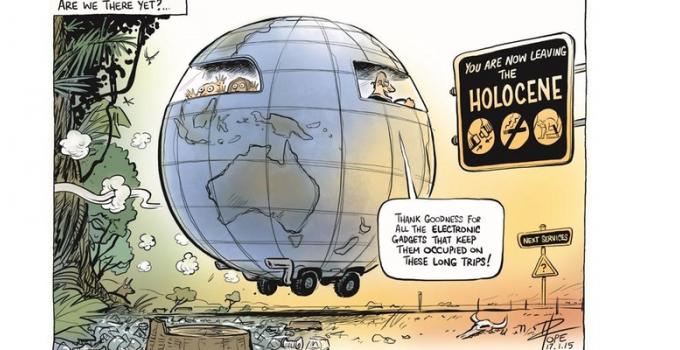 is there a real danger that the language of emergency elides the responsibility for the mess we are in and stampedes “us” towards really stupid things that will make things much worse?

Does the reality of this danger mean we should be paralysed, defeated and defeatist?

It means we have to make the case for socially just, sensible (as opposed to “smart” – with all the technochauvinistic baggage that comes with) patches and manoeuvres for the coming shit storm.

Finally, if we are worried about geo-engineering and other idiotic proposals, let’s dump/resist  all the talk of solutions and fixes, okay? Let’s grow up and know that there are no pain-free options,. The key questions are whose pain, and how much? We here in Manchester need to think about who should be cutting back and who has room to ‘grow’ locally, nationally and internationally.