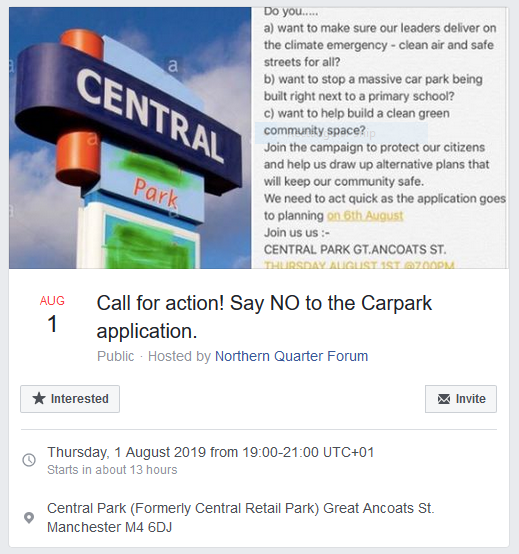 Many of you will know that Manchester City Council declared a Climate Emergency on July 10th. Some of you will know that that very same council is planning to use the land where the Toys R Us was on Great Ancoats St as a temporary car park (nice money-spinner, shame about the carbon emissions).

One of the groups objecting to this is the Northern Quarter Forum, which is hosting a rally TODAY.

Below is an email interview conducted with Joanne Cross, secretary of the Forum. You can find the Forum  on Facebook here, and on Twitter as @NQForum

1. First off, what is the Northern Quarter Forum – how long has it been going, who set it up, why? What are some of the battles it has fought/lost/won. Is it affiliated to any political party or NGO?
NQF was set up before my time by an ex local Councillor who then wanted the residents to run it for him but it never really took off although NQ Greening arose out of it with a group of non-political locals. The NQ fell into Ancoats and Clayton & City Centre Wards which obviously wasn’t ideal. People move on and 5 years ago when making enquiries as to whether there was a residents group there was only a handful of concerned residents left who were concentrating on greening the area more than anything. Informal meetings were still held with police and council updates.

Since 2014 we have gained nearly 100 members, (which doesn’t sound like a lot but the population of NQ is pretty transient) and over 3,000 followers on Twitter so, in October 2018 we decided to constitutionalise as we were growing as a group and needed to be taken seriously, we then had a voice and connections. “People live here. We are residents dedicated to making the Northern Quarter a clean, green and better place to live for the benefit of all.” We organise litter-picks, planting projects and take a keen interest in the preservation of the neighbourhood’s heritage.

A major battle was over the Shudehill / Back Turner St. development. During a well-attended consultation meeting we were told that the warehouse was dangerous and had to be demolished the very next day. Unsurprisingly demolition was part of the proposed planning application for a hotel. Part of the gable end was indeed demolished but we managed to persuade our fairly newly elected Councillors to put a halt to the rest being demolished. Salboy, the developers quickly realised we meant business and included us in further discussion and consultations. Out of the next 3 proposals, which had now become apartments and some retail, we were pleased to see that the warehouse could be retained with the inclusion (albeit tiny) a pocket park.

Two sites on Thomas St. were also of concern to us. The first was the old Shopfitters site which had planning permission to be demolished (apart from a corner unit which is listed) and the construction of “artisan dwellings” which in our view were far from that. The day before demolition was due to start a concerned Manchester citizen applied to get the whole site listed and now the developers are having to reconsider their proposals. We can’t take credit for the listing application but we are very grateful to whoever it was. The developers have since asked for our opinion and suggestions but our concern is that they don’t maintain the properties and again may fall into disrepair.
The second site is the corner plot of Thomas / John / Kelvin / Back Turner. The planning permission for this site appears to have universal approval as it at least retains the corner (Al Faisal) building.

In June, we successfully persuaded the Council to close Stevenson Square from Oldham St. through to Newton St. to traffic which hasn’t been done before, for Clean Air Day. We organised “The People’s Pop-Up Park” in 9 days, enlisting the help of Friends of the Earth, Walk Ride Mcr, TFGM and others. We hope that Stevenson Square will soon be traffic-free and return to it’s historic purpose of being for the people and the home of radicals.

For The Great British Spring Clean in April we had a very successful guided art & architecture tour lead by Hayley Flynn, picking litter along the way and hope to do many more.

We are not affiliated to any political party and do not wish to be. We aren’t an NGO as such although we are a non-profit organisation and we don’t have enough income (through donations) to become a registered charity.

2. What are the NQF objections to the proposed carpark?
The proposed carpark on the Central Retail Park site is such a wasted opportunity. There are proposals afoot for a luxury office development but not for at least 5 years. The Council own this land and obviously want to make a quick buck from parking revenue until the re-development starts, as has been the case with many land-owners in the city centre for many years. Our Council declared a Climate Emergency on July 10th the day after the planning application was submitted .and now they are encouraging more cars to come into the city centre instead of finding ways to discourage them. This is a 10.5 acre site right next to Cotton Fields, the Marina and more importantly a primary school. It would make perfect sense to link all these together for the benefit of residents and visitors alike and because of the appalling lack of green spaces in the City Centre and the ever increasing population, surely the health of the citizens should take priority.

3. What would members like to see the space used for instead?
We are holding a rally on Thursday Aug.1st. to find out exactly what people suggest, whether that’s allotments, woodland, sporting facilities, children’s playground or all of those linking the canals and marina for the community. If the site has to be developed in the future, surely social and affordable housing should take priority on Council owned land?

4. How are you going about opposing the existing plans and proposing others?
We will be encouraging everyone to object to the planning application which is going to the committee on August 6th

5. How can people get involved?
Object to the planning proposal before August 6th and attend the rally on August 1st

6. Anything else you’d like to say.
Lots!……but sadly busy this week

Why does finance care so much about students?

@alessioilgreco and @RahelSuess trace the financial web that ties the ongoing lockdown fiasco at MMU with global private equity and ask—what might we do to push back against the financialisation of housing?
http://www.gmhousingaction.com/finance-students/

And here is your record on attracting people to walk and cycle.
https://climateemergencymanchester.net/2020/08/17/new-report-cycles-of-contention-reveals-utter-failure-of-manchester-council-to-collaborate-with-other-local-authorities/

I think we can all agree that Australians are just that little bit .... different...

This, @GMPF_LGPS is the principal reason why you are wrong to pursue engagement rather than divestment from the fossil fuel majors.
More on this from us in the coming weeks as you are ramping up your propaganda against getting out of oil, coal and gas. https://twitter.com/PriceofOil/status/1308625618850914305