Campaigners have revealed that Manchester City Council has assigned no additional resources to climate action after its ‘climate emergency’ declaration in July.  In response to a Freedom of Information Act request submitted in early September, the Council was forced to admit that “no additional staff have been seconded to work on this area since July 2019” and no resources from within the council reassigned. In response to a question about whether any external bids for funding had been made, the Council admitted  “No bids have been submitted since July 2019.” 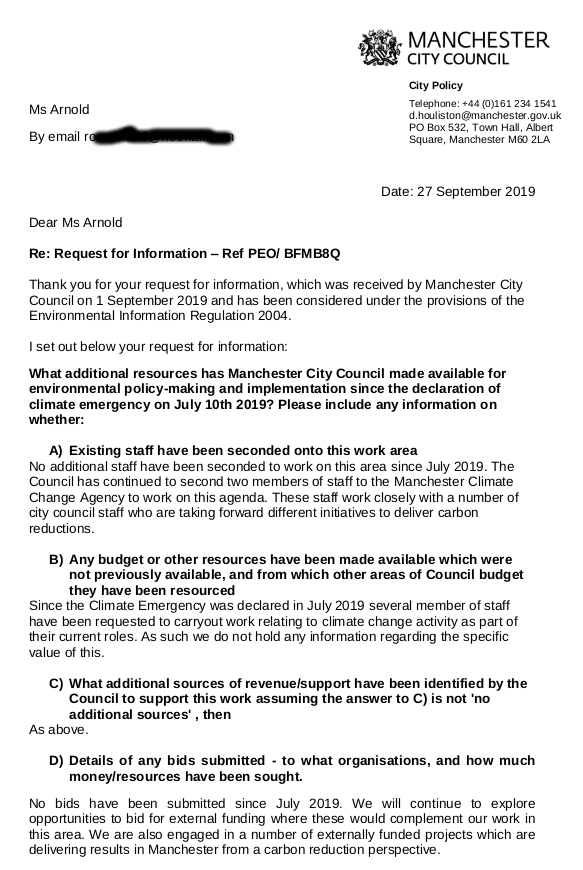 “Declaring a climate emergency was a vital step but the task ahead is enormous,” says Rose Arnold of Rising Up! Manchester Families.
“Manchester missed last year’s target of 13% carbon reduction by 11%. We’re nowhere near. There’s no way the changes needed can be carried out without resources. At the very least a team is needed, which should include a member of the Executive Committee. We’re deeply worried that the declaration of emergency won’t translate into the action needed.”

Calum McFarlane of Climate Emergency Manchester said
“this is disappointing, but not surprising. We know that many councillors genuinely care, and want to see action. They, like us, are angry at the lack of any sense of urgency from the leadership of the council, both elected and unelected.   We will continue to work with people throughout Manchester to raise not just the level of ambition, but also action. We need deeds, not words.”

On Thursday10 October – the three month anniversary of the City Council’s declaration –  Climate Emergency Manchester will release its first quarterly progress report on the Council’s actions, based on a series of Freedom of Information Act requests. The report,  known as “Hung Drawn and Quarterly #01”, will be free to download from www.climateemergencymanchester.net

If you want to sign the petition calling on Manchester City Council to declare a climate emergency, you can do so here.  If you want to get involved in CEM’s work, email us on climateemergencymanchester@gmail.com

🚨 STATEMENT ON VERDICT & WHAT YOU CAN DO 🚨

Firstly, we need you to read about these boys. Articles based on the prosecution’s racist narrative will try to tell you who they are.

We wanted to share some reflections on the boys ⬇️ link to full text: https://bit.ly/3ws6zC8

A talk next week with a researcher who 'examines the impacts of climate change on glacial activity and meltwater dynamics, as well as present-day Arctic glacier retreat'. Not heard much positive news on that recently! https://theconversation.com/ipcc-report-paints-catastrophic-picture-of-melting-ice-and-rising-sea-levels-and-reality-may-be-even-worse-124193

Good thread on the use of language by local politicians to dampen social movement demands on climate and the environment. https://twitter.com/ClimateEmergMcr/status/1526860840380551169

Good reporting by @josephtiman about this saga in which someone is now in intensive care. We really hope they recover. A few points of concern 🧵 https://twitter.com/MENnewsdesk/status/1526798119664492545

Lib Dem councillor John Leech accuses Labour of breaking a long-standing consensus about members allowances. He says this was done to make it 'increasingly difficult' for the opposition to hold the ruling group to account #LDReporter