Manchester City Council has made no progress on many the 23 elements of its climate emergency declaration, according to a report released today. 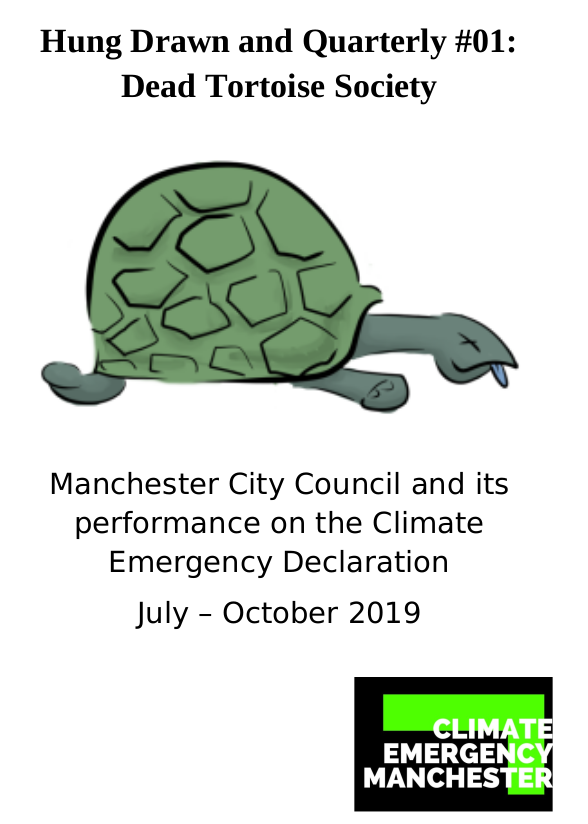 The report, called “Hung, Drawn and Quarterly #01: Dead Tortoise Society,” is based on a series of Freedom of Information Act requests, and is released on the three month anniversary of the Council’s unanimous declaration of a climate emergency. It assesses the actions of the Council on the elements of the declaration against a five point scale from “speedy hare” to “dead tortoise.” Almost all of the elements are assessed as either “slow tortoise” or “dead tortoise.”

• The Council is not taking action to perform an open and transparent review of its 2038 target to be zero carbon by the end of this year, in clear breach of its motion, which was unanimously passed
• The Council will take 4 years to update its local plans
• The Council has held no discussions about reducing the air travel of its officers and elected members
• The Council has held only one of the meetings in each of its 32 wards it promised to do by April 2020, leaving 31 to be done in the next six months.

Calum McFarlane of Climate Emergency Manchester (3) said
“This is extremely,disappointing. Declaring a climate emergency was supposed to increase the pace of action. The council seems to have done nothing about looking at bringing forward the zero carbon date to 2030 after an open and transparent process. This directly contradicts the promises made.
“On most other issues, either existing work is continuing, at the same slow pace, or nothing is happening at all.
“We know that many councillors genuinely care, and want to see action. They, like us, are angry at the lack of any sense of urgency from the leadership of the council, both elected and unelected. We will continue to work with people throughout Manchester to raise not just the level of ambition, but also action. We need deeds, not words.”

You can read the report here. We urge you to share it on social media, and especially to send it to your councillors if you live, work or study within Manchester City Council’s boundaries.

If you want to get involved in the work CEM does, please fill in our ‘get involved’ form here. We will NOT share your details with anyone else.