After Manchester City Council’s Climate Emergency declaration in July, there were, shall we say ‘ongoing discussions’ about how the Council would progress and scrutinise the actions listed.  One outcome of those discussions was a ‘climate subgroup.’  Subgroups come in two flavours.  Firstly…

But wait, I hear you say. “What IS a subgroup?”

Okay, so. Manchester City Council has 96 Councillors, each elected for a four year term.  At the mo it is overwhelmingly Labour (93), with 3 Lib Dems.  There is a ten member “Executive”, with a leader (Richard Leese, since 1996), two deputy leaders and 7 ‘Executive Member for x’ where x might be Adult services, Children’s services, Sports and Leisure or… the Environment.

To keep tabs on what is happening, there are 6 scrutiny committees, made up of the other 86 councillors. These committees – Economy, Resources and Finance, Neighbourhoods and Environmet etc, meet – in public- ten times a year. Each meeting is 2 hours (occasionally they run over (1)).  If these committees feel there is something that needs extra specific attention, they can agree to form a subgroup.

Subgroups come in two basic flavours. Task and Finish groups try to kick a policy over the ‘finish’ line (2)  Subgroups groups try and keep tabs on running sores (and sprinting ones – I am not speaking Council-speak here, obvs).  These groups have, in the past, been used to kick issues into the weeds, allowing the illusion of activity and bloviating by councillors (Environmental Sustainability Subgroup 2013-14, I’m looking at you).

Not. This. Time.  As far as yesterday tells us.

The Climate Change subgroup (surely it should be called the Climate Emergency Subgroup?) met at 10am yesterday in the usual space (it would be great if we had so many folks attending that these meetings have to be held in the main chamber, as the planning committee meeting was last week – but that’s for next year…)

The committee is made up of

Here’s the bluffer’s guide we made for the day. A prettier one is in production… 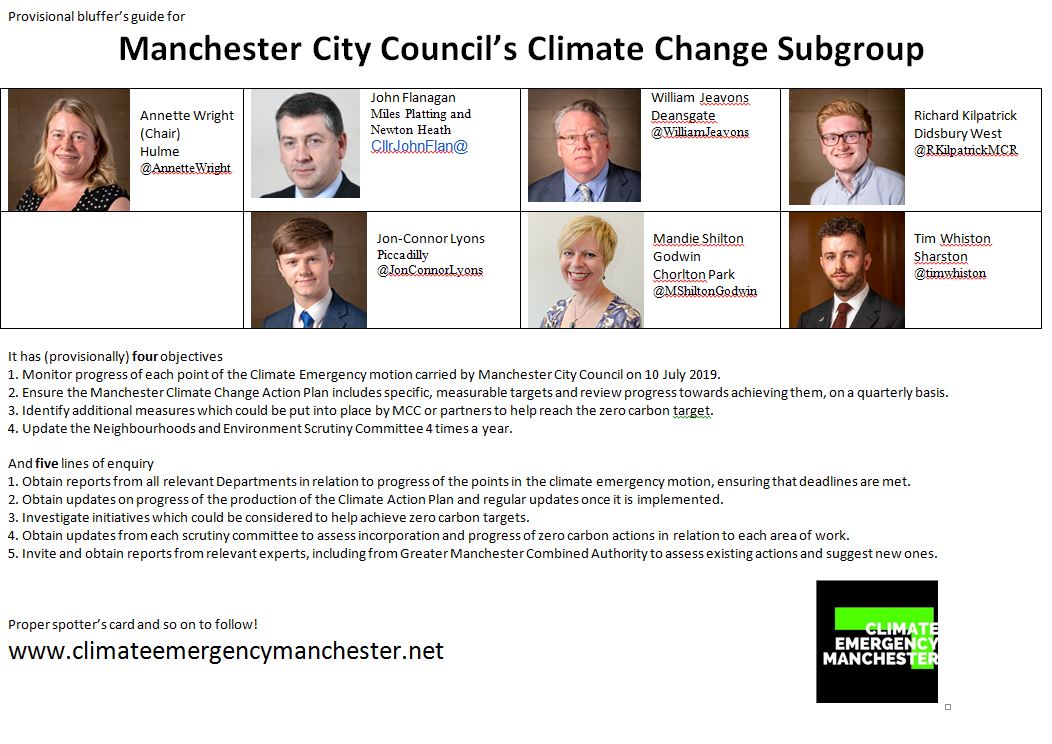 While scrutiny committee meetings are now filmed and live-streamed (the result of a previous activist campaign, btw), the subgroups are NOT (funding, contracts etc).

So, you will have to make do with WonkyCam and dodgy audio of the first 100 minutes or so (then I had to go – see footnote 3).

The tl:dr is this.  The councillors were being forensic (it’s a pity Cllr Flanagan wasn’t there is, because on his day he is more forensic than Quincy). The officers seemed to slowly be getting used to the idea that the usual tactics at scrutiny committee meetings might not be so effective at this subgroup. The lesson has still to be learnt, it seems, by some others.

The question of whether councillors from the subgroup will be able to observe the work of the ‘Zero Carbon Coordination Group’ was left unanswered. That group, we learnt, is not minuting its meetings, which is extraordinary and in every sense unsustainable.

The committee has asked for a lot of reports, and, as reported yesterday, we may well see a Tyndall … sorry, Centre, scientist or two addressing the next Neighbourhoods and Environment Scrutiny meeting on Weds 6th November (2pm).

Some members of the public DID get to address the committee on specific issues, and I would urge them to write accounts of what they said, what the replies were, what they thought of the whole process.  We will add them here as they come in.

More, this:  We need to keep tabs on all the Council’s work, not just the climate emergency declaration.  The subgroup is one way to do this, but not the only way, and citizens have to figure out how to engage most constructively.  Some thoughts

a) it is important to prepare people for the full tedium of it (but it is important, and we have to do it). A pre-meeting would be a good idea.  There are plenty of places to meet at 9am ..

b) we need to film and live-stream it. and get people watching and tweeting.

c) a post-meeting/debrief, both for those who were present and those who weren’t (twitter and skype can do this!) would be a handy innovation too

d) we need to engage with these councillors on how they perform (yesterday they did well), but also other councillors who attend, would attend, give a damn.

e) This requires many more hands on deck. If you want to get involved in Climate Emergency Manchester, please fill in this get involved form, and share it with any friends/acquaintances you have who express an interest in getting involved in environmental/climate action with a social justice ‘non-negotiable’ element  (so, no geo-engineering fanboys)

(1) By run over I don’t mean “democracy and transparency”, though they do that too. I mean time.

(2) No policy is ever truly finished. Big wheel keep on turning…

(3) This is important to remember: being a councillor is not paid as a full-time job.  Councillors DO have other jobs, other commitments. It is only if someone is consistently sending their apologies that eyebrows should be raised.

This post by Marc Hudson, one of the five members of the CEM core group. It does not necessarily reflect the views of the other core group members.

2 thoughts on “#Climate subgroup meeting – videos and commentary ‘what is to be done?’ #Manchester”