Skip to content
30 March, 2020 Marc Hudson Leave a comment
CEM will be putting up a blog post soon its plans for the months ahead, “under lockdown” and opportunities to be involved. 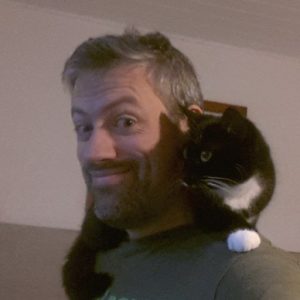 ONE of the things we will be doing is email interviews with people active on climate change (be they activists, academics, policymakers etc).  First up is Ben See, who those of you on Twitter may recognise as “Climate Ben“….
1. Tell us a bit about who you are- where you were born, grew up, educational level (not that it makes you more or less plausible!).  When and how was it you first heard about climate change?  Did you straight away think ‘we are probably toast’, or did that sense take time to emerge?
Born in the south of England, grew up in the South Manchester area (Cheadle Hulme). I have a degree and a PGCE. I don’t recall giving climate change that much thought before the late 1990s. It began to really creep up on me between 2010 and 2015. In the summer of 2017 I investigated the whole question thoroughly in preparation for a school project I had decided to set up – that’s when I grasped that the time for action was in the ’70s and ’80s. It was quite an experience to realise it was too late to avoid calamity. It’s still surreal to think about it.
2. You spend a lot of time on Twitter – is that a conscious choice – as in, do you think Twitter is a particularly good medium for communication? What OTHER outlets do you use/have you used?
I ended up on Twitter as part of the project. A friend had introduced me to @medialens, and having read their work I saw that it was vital to try to counter corporate media propaganda, especially on climate and ecological breakdown. The project was ambitious and radical but only a partial success (failure). I was deflated, got addicted to tweeting in a mad attempt to spread the word, and 4 viral tweets last year made my account popular. I tried Instagram but got nowhere. I use Twitter in the hope that I might trigger more and more awareness, but all attempts to counter corprate media feel pretty desperate, frankly. Worth a try though.
3.  Besides underplaying the seriousness of the climate threat, what do you think have been the OTHER important failings/mistakes of ‘green’ groups?  What would you like to see groups doing differently?
I have zero experience in organising, so I don’t feel that I’m well placed to criticise. I would say that few really confront the reality of the US Empire, and I feel that if you don’t get to grips with imperialism you won’t get anywhere. It’s difficult in the UK because people are encouraged to feel that the British Empire was a force for good. And how many green groups say clearly that the key problems are economic growth and corporate capitalism? How many focus on classism?
4.  Tell us a bit about your perspective on COVID19 and how it links to the climate crisis?  Also, what do you think the risks are for the “post-COVID19” world – that there will be a weak Green New Deal, that there will be a demobilisation/exhaustion of climate groups, something else (too)?
We’re increasingly in danger from authoritarian forces, and every crisis is an opportunity for those in power to consolidate that power. We risk having no green deal at all and 5 or 10 more years of high emissions and the wiping out of most species. However, quirks of Fate are part of history and we’ve no idea what unexpected positive twists might be in the pipeline mixed up with all those fossil fuels. I still think we’ll see 100s of millions on the streets trying to shake things up, but will it help? And will it not be ‘too late’ by the time it happens?
5. Anything else you’d like to say?
Fuck liberal capitalism, I guess.