“Things That Won’t Save Us” (TTWSU) is an occasional series of blog posts by members of Climate Emergency Manchester.  We welcome constructive comments & criticism, and links to relevant further reading.

This is not intended to be the “the last word” on this topic – rather a summary “position paper” which I may update as new information becomes available, etc.

Cars are everywhere. There’s well over a billion of them in the world and every year, humans make 60 million more. That’s roughly one car for every five human beings, but of course they’re far more numerous, and replaced far more often, in wealthy countries. In the UK, there are now 38.7 million of them.

From a climate change point of view, this is all very bad news. Manufacture of cars requires production of steel, aluminium, assorted plastics, copper, glass, rubber, lead, sulphur and many other materials.  These all have to be mined from somewhere, refined somewhere else, and manufactured into a vehicle component yet somewhere else. Each step in that supply chain produces CO2, whether via the bunker oil burned by a cargo ship, the coal or gas burned in a power station to run a factory, the coking coal used to smelt the steel ore, or the diesel fuel that powered the mining equipment that pulls the raw ores from the earth in the first place.

The vast majority of all cars burn petrol or diesel as fuel, producing CO2 all the time they are operated.. They also produce nitrogen dioxide and particulate matter from their exhausts, which causes all manner of ill health, especially when lots of cars move slowly, as they frequently do in towns and cities.

Even their noise can have an effect on our health.

They are so common we have stopped thinking about it, but internal combustion engines (which are a form of Heat engine) are an inherently inefficient way of moving a vehicle. It’s only because there is so much energy in petroleum that it works at all, but the vast majority (over 80%) of the chemical energy in the petrol is wasted. In the UK, transport fuel represents the largest source of carbon emissions and cars emit more CO2 than all power generation.

Decades of advertising means society is heavily emotionally invested in the car – for decades, they have symbolised modernity and “progress”, and council planning departments still act as if dominated by this very 20th century view.

So, being as dominated by cars as we are, it was perhaps inevitable that we would fixate on a way to rehabilitate a “carbon criminal”; sure enough, we see EV infrastructure often bandied about by governments (local and national) keen to emphasise their green credentials.

Well, EVs don’t produce air pollution from combustion, and electric motors are considerably quieter than internal combustion engines. Their greater mechanical simplicity means that, at least in theory, they can be much more reliable and hence replaced less often. Electric motors are far, far more efficient at converting energy into motion, and EVs, due to their simpler mechanical construction, have much lower waste heat and drivetrain losses, meaning that their overall carbon footprint is lower, even when running on relatively “dirty” electricity. As electricity is further decarbonised, this advantage grows.

Last of all, they are really nice to drive (1) – smooth, quiet and with plenty of torque, meaning they “feel” fast even if headline power ratings are not impressive compared to “normal” cars.

Well, no. First of all, try this thought experiment:

Swap out every vehicle with an EV

In the energy constrained world we need to live in, 1,500kg of metal etc to move (on average) 1.25 people is not a sensible use of energy, no matter how efficient the drivetrain. In addition, cars in general are a very inefficient use of road space – from linked article:

“…in virtually all cities, transport infrastructure is to a considerable extent devoted to the car. This is problematic because the private car is the most space-intense transport mode. As Nello-Deakin (2019) illustrates, a parked car requires at least three times more space than public transport, and ten times more than the bicycle. When a car is driven at 50 km/h, it requires 70 times more space than a cyclist or pedestrian, highlighting the importance of discussing space as a function of speed.”

and EVs are no smaller than “normal” cars. Furthermore EVs are still dangerous to other road users (just as fast, just as heavy) – and much quieter.

There are many other issues associated with our high reliance on cars; this is an excellent review of the literature, but to summarise the key points:

Aside from their effects when in use, the manufacture of EVs forces us to consider less obvious planetary dangers. A recent article by academics at the Natural History Museum in London pointed out that there are multiple materials supply issues with key minerals (cobalt and lithium for batteries, copper for motors and high current wiring, neodymium and dysprosium for the powerful magnets used in the motors) – in short, there just aren’t enough of these things for the world to replace its current fleet with EVs. And that’s disregarding the appalling environmental and human impact of mining, or the carbon impact of their production; EVs still need steel, aluminium, glass, rubber and plastics in similar quantities to ‘ordinary’ cars.

Changing how we power a car doesn’t change how we use them – by some estimates cars only spend 5% of their time actually being driven; and they don’t use any less space when parked up.  By this measure, they are a very bad investment of the huge amounts of resources they would need to produce them. Bicycles (both normal and electrically assisted) being much lighter, represent a fraction of the embodied energy of a car; and electrified public transport (particularly if running on rails) are a far more effective way to use construction materials such as steel and aluminium. While the upfront investment is in some ways greater, the materials are in near constant use, rather than being sat idle for much of their life.

Stepping away from technical considerations, we may consider the social impacts of cars; they are in ideology a luxury good, but one that ceases to be a luxury once their ownership is widespread. Cars (principally through the economics of their manufacture and the political economy that arises from this) also exert influence on our societies and our politics that make it increasingly difficult to escape high carbon ways of living.

Cars won’t go away, much as some might wish it. In some parts of the UK with low population density and minimal public transport provision, EVs may be the best option to provide low carbon transport options; they are an obvious choice for any taxi provision as well, albeit ideally in a form which caters to those who cannot use other forms of transport.

But we must stop pandering to them and their (very powerful) political lobbying, or continuing to design our cities and new housing around them – doing so is inherently regressive as car ownership drops sharply in the lowest levels of income in our society (see here – data set nts0703). From a climate point of view, building infrastructure with cars as the primary transport mode locks in decades of emissions, or makes it useless and the emissions from building it a waste (since infrastructure for motor vehicles is rarely ideal for other modes). And of course, building roads is catastrophic for wildlife and broader ecosystems.

This is not an original conclusion, but it’s never been more important to encourage people out of cars into other modes (active wherever possible) – but also discourage  “car by default” development model. (2)

This will only happen if sufficient numbers of concerned citizens make it clear they are not prepared to accept high-carbon and short-sighted developments, and local authorities are forced to listen to and act on such concerns, either by changes in local election outcomes, or by the actions of activist groups, acting with popular support.

1 – The author of the piece owns an EV (and at time of writing, one of the most efficient on the market); in a world dominated by cars, it is the least bad option. He would dearly love to be able to do far more journeys on his bike but being a parent of two children and also having been taken to A&E on a backboard after being knocked off his bike in broad daylight, on an otherwise deserted road, he is unwilling to place his life in the hands of drivers more often than he absolutely has to. Usual memes apply: 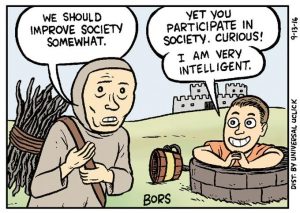 Below I list the articles linked that are of particular interest if you have a deeper interest in this topic:

Why cities need to take road space from cars – and how this could be done (Gössling) – Journal of Urban Design, published online 18 February 2020