To continue a Meatloaf theme we began on Twitter, “objects in the rearview mirror may appear larger than they are.” Like the amount of carbon dioxide actually released in this city, as opposed to what we assumed/hoped/guestimated/find convenient to believe. 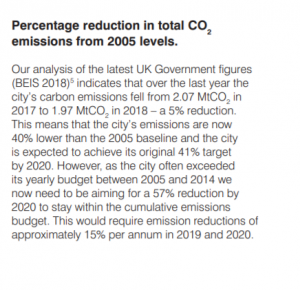 Percentage reduction in total CO2 emissions from 2005 levels.
Our analysis of the latest UK Government figures (BEIS 2018)5 indicates that over the last year the city’s carbon emissions fell from 2.07 MtCO2 in 2017 to 1.97 MtCO2 in 2018 – a 5% reduction.
This means that the city’s emissions are now 40% lower than the 2005 baseline and the city is expected to achieve its original 41% target by 2020. However, as the city often exceeded its yearly budget between 2005 and 2014 we now need to be aiming for a 57% reduction by 2020 to stay within the cumulative emissions budget. This would require emission reductions of approximately 15% per annum in 2019 and 2020. (emphasis added)

Well (and thanks to an eagle-eyed friend of CEM) the more official figures are now out. And if you go  to the spreadsheet here, and then scroll down to Manchester, well, we’ve screengrabbed the relevant bit, cut out all but the last column and put a nice big red circle where you need to point your eyes…

No doubt the Climate Change “Agency” will put these numbers into their latest report, due to be released at (but probably not before – can’t have people being able to ask detailed questions!) their next annual meeting.

That AGM is due in the second half of July, which is ages away, and so hasn’t gone up on their events page yet. Fortunately, that events page is properly packed, though. Here’s a screengrab from this morning.

Final fun fact – we recently learnt that Climate Emergency Manchester has been blocked on Twitter by the Climate Change Agency.

If you think Manchester needs proper scrutiny of its climate policies, please sign and share the petition for a seventh scrutiny committee.