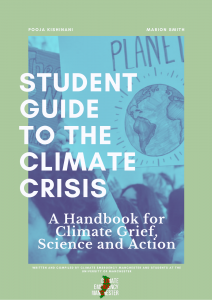 The Student Guide to the Climate Crisis was launched last night at an online meeting. The guide is 60 pages worth of detailed information for action.  It covers the emotions of climate change, the basic facts (about the science, international, national and local climate policy) and a large section on how to take local action.  You can download the whole thing as one pdf, or go here to see individual pages tp download.

At an online meeting the editors of the guide, Pooja Kishnani and Marion Smith (both members of CEM’s core group), explained a bit about the motivation for creating it, the process, and the product.

Marion Smith, a Master’s student in ethno-musicology, explained that she had for the last 18 months been doing climate activism while also finding her lack of detailed knowledge of the science and the policies to be a problem.

“There wasn’t a simple guide that talked about these in plain language. When Pooja and I met, we clicked, and we realised that we could, with help from others, make just the guide I wish I had had.  And we both also wanted it to talk about the emotions involved in looking at climate change.”

Pooja Kisnnani, a third year Politics Philosophy and Economics student, agreed.  “Opening the handbook by talking about climate grief and how to cope with it was crucial. We worked for almost two months to get the guide ready. One of the best bits was all the interviews we were able to get with all sorts of people. We have had more in the last few days, and will be able to publish those online and in a second edition of the handbook.”

There was time for all attendees to introduce themselves, and also to brainstorm ideas. The handbook will be advertised extensively over the coming months, and CEM will work with its allies to create memes, gifs, animations, short videos based on the existing content. Beyond that, Marion, Pooja and the broader group of people who brought it to life are planning to work with other people in Manchester to help embed climate change in the curriculum, and in daily life.

They want to hear from anyone who wants to circulate the guide, to create new resources.  Anyone in Greater Manchester is welcome to join in.

And if you live, work or study within Manchester City Council’s boundaries, please sign and share our petition for a seventh scrutiny committee, which will up number of eyes on the Council on climate change.