Jackie Haynes from Team Scrutiny discusses the climate-relevant content from last month’s Communities and Equalities Scrutiny Committee of Manchester City Council. The world’s eyes might be on COP 26, but we haven’t forgotten about the promises made (and so often broken) in Manchester!

October’s Communities and Equalities Scrutiny Committee meeting was promisingly bookended by the Chair’s foregrounding of Manchester City Council’s declared Climate Emergency. Cllr John Hacking (Chorlton) stressed the Committee’s obligation to the Environmental Impact Assessment in all reports, to achieve the zero-carbon target for the city of Manchester.

At the beginning and end of the meeting, Cllr Hacking pointedly encouraged report-makers to ask, “What in this report is relevant to our climate change ambitions?” He suggested bringing out the climate element of each report, or alternatively to state its absence, to keep the zero-carbon target in view throughout each scrutiny committee meeting. The Council has promised to treat the climate emergency as a cross-cutting issue in all scrutiny committees by reporting in this way, but that promise is rarely delivered.

The Environmental Impact Assessment prefaces every scrutiny report for council officers and members of the executive and are made available to the public. The prominent banner heading sets up an expectation that each report delivered for scrutiny will present evidence of zero-carbon target action, which is sometimes but not always the case, depending on the subject of the report. Many reports simply leave this section blank without any effort to show connections between climate breakdown and its increasing impact on Manchester residents’ lives.

The Executive Member and Deputy Leader of the Council, Cllr Luthfur Rahman (Longsight), reiterated the interlinking urgency of achieving equality by removing deep rooted barriers connected to the climate emergency. Well-intentioned words have been said so often by so many people, that for now, I can only think to pass on some from the Executive Member in a word cloud and watch it waft by: 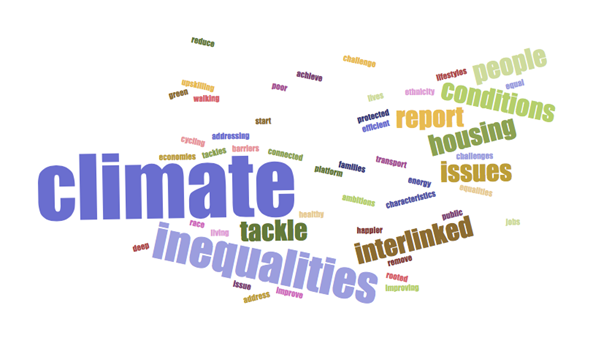 Only the executive members can implement the necessary policy changes and they have the full knowledge of our collective climate priorities. For such words to be meaningful, Manchester City Council needs to speed up its promises and implement policy changes and integrate this into scrutiny.

Hopefully there will be more climate-related content to report next time, fuelled not least by COP26 and the Communities and Equalities Scrutiny Committee’s renewed Environmental Impact Assessment promise.

The next round of scrutiny in Manchester is coming up at the start of November. If you want to get involved in local climate activism, get in touch, and/or join our social on Saturday 6th November, 5pm, at the Sandbar on Grosvenor Street.