When Councillor Bev Craig became Leader on 1st December, she gave a speech (part of which addressed climate change, which we have analysed here) and took questions from the floor at full Council.

Bev Craig then faced a question about Manchester Airport, about which CEM has just produced a report with analysis and recommendations. The new Leader was able to fob off the questions in a polite way by pointing to the report on the airport going to the Environment and Climate Change Scrutiny Committee this Thursday (warning, that report contains much greenwash and diversion!). Councillor Rob Nunney’s question about the possibility of a departure fee for those taking more than one flight a year was not addressed.

What this means: Bev Craig is not making a bold start on this front, pointing to procedure to avoid the substance of the questions. This adds yet more pressure on the report going to the Environment and Climate Change Scrutiny Committee on Thursday and everyone involved there. CEM has questions to ask. Watch this space! 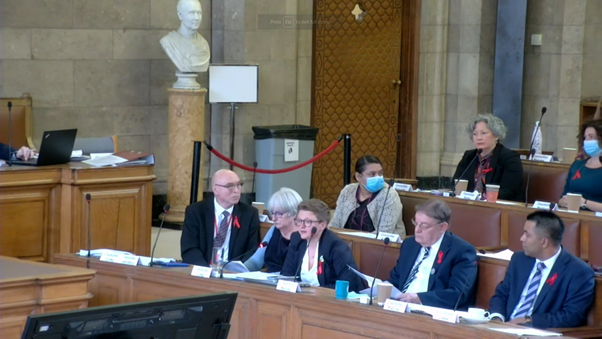 Councillor Craig, middle, front row, responds without substance to questions about the airport.

Nunney: Thank you, Lord Mayor. With regards to greenhouse gas emissions from aviation, Councillor Leese pointed out at the last Council meeting that this requires international solutions. In Councillor Craig’s opinion, is there anything that Manchester City Council as a significant shareholder in Manchester Airport Group can do in order to help bring down emissions from this sector?

Craig: Thanks and recognising probably the strangeness of the situation, asking one person a question at one meeting, the other person the question at this one, what I would say is there’s lots we’re doing, so much so that we’re taking a full report to scrutiny next week. So I would recommend that you read that if you’ve got any questions direct them through the relevant scrutiny chair.

Nunney: Thank you, Lord Mayor.  It’s generally accepted that 70% of flights are taken by 15% of the population, which I can assure you are not the ordinary working people of Manchester. And according to the CREDS place based carbon calculator residents Woodhouse Park bear the biggest brunt of the airport, and are amongst those who use it the least. Furthermore, the Committee on climate change states that there shall be no net expansion of UK airport capacity unless the sector is on track to sufficiently outperform its net emissions trajectory and can accommodate the additional demand. Would Councillor Craig seriously consider the proposal made by John Broderick of the Tyndall Centre for this council to work closely with Manchester Airport to establish a local departure fee, a charge of 10 pound per departure accompanied by an annual first flight waiver so that the ordinary working people of Manchester can still have their two weeks in the sun. This may raise in the order of 100 million pound per annum in total, with 35 million pounds according to Manchester City Council.

Craig: Thanks, I would go back to saying that the way I think decisions are made within the Council is that this goes through scrutiny first before coming to full council. I’ve today talked about my ambitions for the city in which we take action on climate change and there is lots that we are already doing in conjunction with the Tyndall Centre, but also in conjunction with Manchester Airport Group. And my answer would be the same as it was to your first question, let’s begin by looking at the report that goes to scrutiny and have a proper detailed discussion. And I’m sure Councillor Rawlins’ (Executive Member for Environment, Baguley) door is always open, should you wish to ask questions.

*The transcript was produced via Otter.ai and edited for accuracy but it may not be 100% accurate.