After a bit of a summer break, this month sees Hannah Ballard of Team Scrutiny delve into the world of Greater Manchester Combined Authority Scrutiny & Overview Committee with a look at the “Greater Manchester Path to Carbon Neutral” or we’ve blown the carbon budget by 2024 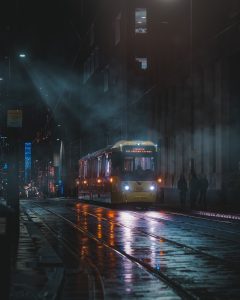 Climate topped the agenda at Greater Manchester Combined Authority’s (GMCA) August 24th Scrutiny Meeting. Councillor Martyn Cox (Conservative Leader of Bolton Council, and Portfolio Lead for the Green City Region) and GMCA Director of Environment Mark Atherton were given the floor to walk through the Green Strategy. You can watch the full recording here.

Cox indicated that a six month review of the strategy’s performance will be published soon. While he gave no details on its performance, he shared an unsurprising teaser: we are falling behind on environmental targets, and need to make significant changes to get back on track. While a strategy’s performance is arguably critical to understand its value, the committee nevertheless persevered.

Effective scrutiny that drives meaningful change can only happen if we give it time – time that is in short supply in a climate emergency.

Missing the point in the big picture

Councillor Cox perhaps summarised it best: “the big issue … is our 2038 carbon neutral date.”  This is a key issue with local council scrutiny: an incidental focus on local roll outs over the larger problem. Atherton pointed out that the 2038 targets weren’t random, but built on an alleged ‘track record’ as GMCA is ‘roughly on track’ to achieve a 40% carbon reduction by 2020 from 1990 levels. This prior ‘success’ was enabled by national government picking the ‘low-hanging fruits’ of green changes in shifting from coal to renewables.

One of the greatest hurdles to understanding the impact of this strategy is the limits of the scrutiny process itself.  To paint a comprehensive picture of the GMCA’s strategy, details around initiatives, implementation and next steps were skipped. This is a core issue in climate crisis discussions: at what point is a society or decision-maker informed enough? We understand how bad the situation is; where is the rush to act?

Broad claims were made about cooperation: between local agencies, community groups, national government, and more. Collaborating on aligned goals is critical to instigate systemic change. Centuries of established practices aren’t overhauled in our own bubbles. Yet these vague ambitions of collaborative approaches hide two underlying tensions: who holds the responsibility for what happens, and who is holding (and exerting) power?

Cooperation is necessary to ensure change can happen, yet it easily becomes a panacea to shift blame outwards, blur project ownership,  and pressure participants to align with the power broker – in this case, the GMCA. To achieve the goals that GMCA has set itself, responsibility needs to lie with them.

Performance indicators used to depict progress were based on project delivery. A lot of green shows that Green City initiatives are on budget and on time, within their planned lifecycle – not necessarily on track to meet the decarbonisation deadline.  This makes it easier to sidestep difficult questions on whether enough is being done to make necessary change.

Throughout the meeting, innovation frequently crops up as an opportunity to address these final decarbonisation challenges. Yet simply calling for innovation cannot be enough as time to innovate is running out – and a contingency plan looks to be lacking. The importance of incentives is raised, without adequate commitment to implement. Requesting funding to fill local gaps is proposed  to accelerate new infrastructure initiatives – but for how much longer is calling for funding sufficient?  Trying is not enough: we need firmer consequences for failure to meet these critical targets.

Atherton raises the worrying point that central government’s own pursuit of net zero by 2050 may make GMCA’s goal  to transition sooner difficult to fund.  Beating the national average could be a great PR win, while failure becomes the fault of central government leadership, instead of local implementation. An earlier carbon neutrality date is ambitious – but without appropriate funding it is unachievable. Globally, scientific alerts about irreversible tipping points have been taken as timelines, not urgent warnings to act before it’s too late. In circling the question of responsibility, GMCA is skirting accountability.

In responding to a question on Greater Manchester exhausting its carbon budget by 2024 without drastic action, Atherton states that it is “commonly held” that, excluding the NHS, a local authority is responsible for  ~2% of emissions, with power to influence ~40% (through policy, incentives, or other interventions). This leaves 60% beyond local authority control which must “play their part to move us towards that target.” While there may be limits to what Local Authorities can do, it is a disservice to discount action beyond the bounds of existing portfolios.

If this 60% is meant to enact systemic change, there needs to be greater engagement beyond the vacuum of local government operations and ‘calls for partnership.’ Communities need to be invited to play an active role in shaping these initiatives, and empowered to collaborate on their implementation, rather than being expected to take leadership themselves. While Manchester City Council has made steps toward engagement, they have fallen short, with surveys that seek only to confirm existing priorities, and a community assembly that has been ignored quickly after it gave a mandate for COP26 in Glasgow and the funding dried up.

This is not to take away from the feat of condensing an entire department of ideas, initiatives and indicators into a 20 minute presentation. Clearly, the GMCA has a huge suite of measurements, tools, theories, and policies on hand. But these instruments now need to be enacted, with appropriate repercussions to stimulate action. We are starting to witness a looming climate catastrophe with its potential to make the planet unlivable. Surely these record temperatures and flash floods should be enough of a consequence to encourage any change?

But for years and years, we have known this was coming, and the city region’s actions have not been sufficient. The forthcoming GM Green Summit on 17th October should be a chance to interrogate the reasons for failures – not just to showcase success, sooth with techno-fixes and blame others, as everyone usually wants to do – so that we can figure out what to do differently.

Fortunately for citizens, the Greater Manchester Combined Authority is very aware of the looming danger of the climate crisis. They’ve identified causes, and hurdles to tackling it. They have identified how the current approach of making emitting behaviours more costly without providing affordable sustainable alternatives, disproportionately affects those already unable to afford their own climate adaptation or mitigation. Yet the time for awareness has passed. We need action.

These scrutiny sessions are intended to ensure that people of Manchester are represented in local policy. But policies cannot be scrutinised without time and space to really drill into what these big ideas or incremental shifts mean. Progress cannot be made until failures have been thoroughly identified and learned from, and obstacles have been cleared. Declaring a climate emergency was meant to be a bold move that allowed authorities to kick into action and respond with urgency. Unless we start to treat the climate crisis as the ticking time bomb it is, we risk squandering the future under the guise of identifying opportunities for innovation and partnership.

We cannot just watch and hope that the local authorities will sort this out for us. We still need a much stronger climate movement in Manchester of concerned citizens. CEM provides one route for citizen engagement with the climate crisis, so if you’re interested in getting involved, email us at : climateemergencymanchester@gmail.com