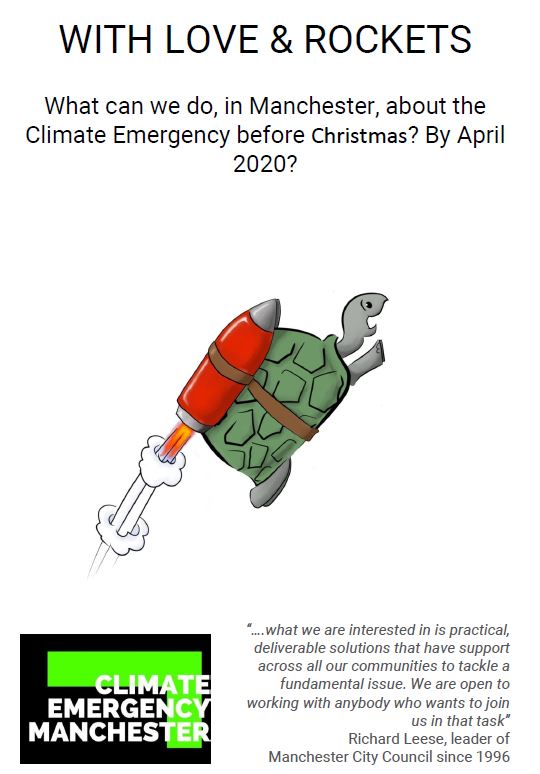 The new 16-page report, called ‘With Love and Rockets‘  calls on Manchester City Council to accelerate and broaden its climate actions. It comes two weeks after the City Council was exposed  as having taken almost no action on its ‘climate emergency’ declaration, and days after it gave approval for a 440-place car park on Great Ancoats St.

The report lays out a series of low-cost actions that the Council and the 96 councillors could take to generate momentum and action. The reports; suggestions come from both CEM and from citizens across Manchester, who were invited to contribute ideas.  Of the dozens of ideas, ideas include –

“Recently the Council Leader Richard Leese said he would welcome “practical, deliverable solutions” from citizens. Well, this report is full of them and it will be interesting to see how he responds. More importantly, Manchester City Council needs to raise not just the level of its ambition, but also immediate action. Setting up committees with macho names doesn’t count. We need deeds, not words.”

CEM is calling upon citizens to send copies of the report to their local councillors (find out who they are here), and ask the councillors a) what they are doing on climate change in their wards and b) what they plan to do in the near future.  CEM would love to hear what answers (or lack of answers) supporters get.  If you want to get involved in CEM, please fill in our ‘get involved’ form.

3 thoughts on “Report: “With Love and Rockets”- dozens & dozens of practical, deliverable and immediate #climate actions for #Manchester”