Lisa Johnson (@LJnatural) kindly answered some questions about the new group she has estabished.

Tell us a bit about yourself: Who you are, when you first became aware of climate change as a problem, if/how your awareness turned to serious concern. 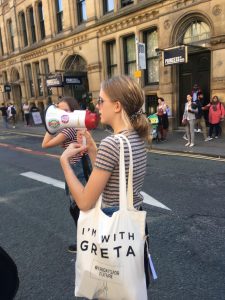 I’m a mum and small business owner. I’ve always been environmentally aware, I became vegetarian when I was 10 in 1983, before it was really even a thing, and was an animal rights activist in my teens. I kind of forgot about all that after University, work, marriage, babies. Then in February we heard about Greta Thunberg and my 12 year old daughter begged me to take her to the Manchester School Strike. I reluctantly went, and that day changed my life. When we arrived in St Peter’s Square, and I saw hundreds of children shouting for action on climate change, I cried. And then I felt utterly ashamed that I had been blindly living my middle-class life in the suburbs, letting this situation get worse and worse and doing nothing. I felt it was my duty as a mother to do as much as I possibly could to raise awareness and become an activist. I couldn’t just carry on and have my children ask me, “Why did you carry on when you knew what was happening to the environment?”

Tell us a bit about Climate Conscious Wilmslow – how did it come into existence, who is involved, what its goals are (though presumably the clue is in the name a bit!)
Initially my daughter and I joined Rising Up Manchester, but it was tricky for us to get to all the meetings in Manchester and we felt a bit like outsiders, being from Wilmslow, a town that is seen as a place for rich, range rover drivers. We joined Transition Wilmslow, and realised that there were loads of lovely families in Wilmslow who wanted to do something about climate change but didn’t know where to start. So I started the Climate Conscious Wilmslow Facebook group and started to gather together people who care about making a difference. We are arranging some events for families, and just want to get some momentum going, to make people feel like they are not the only ones trying to do something, and we want to encourage people to live more sustainably. We want children to have a voice – they can’t vote yet but they can make themselves heard in other ways. We also currently want to raise Climate Change as the most important issue prior to the election. The current Government’s inaction is shameful.

You held a letter-writing event on Saturday, 9th November. Who came? What were the outcomes of the day?
For me it was extremely important that children feel heard and feel valid. My daughter is 12 and is furious that she can’t vote – she cannot believe that adults get to choose her future. We live in the Tatton Constituency which has pretty much always been Conservative, and our current MP has an appalling record on climate action, and gay rights (a whole other story), which is the most horrendous example to set our children. I urgently wanted to make it clear to the current MP and the other 3 candidates that we are not happy with the way things are being done. We want action now. We have our children’s future to consider. The time and money wasted on Brexit whilst the climate emergency becomes worse is terrifying.
The outcome of our get-together was 50 letters and pictures where produced and huge green petition, which we will be displaying at the Tatton Wilmslow Hustings on Saturday 30 November at 2pm at the United Reform Church in Wilmslow. We welcome everyone to come and make the climate emergency the number one issue on the agenda.

What are your future plans? Do you intend to engage with the local authorities? Have they declared a climate emergency yet?
Yes Cheshire East have declared a Climate Emergency and Transition Wilmslow are doing lots of work on communicating with them to get the best outcomes for our area. There is a lot of work to do and Transition are handling all that.

Anything else you want to say?
Yes – we have voices, let’s use them! Stand up for what you believe in, fight for what you believe in, show your children that life is for living and give them a place to air their views. Children can feel so anxious and isolated, but giving them a place to speak and be heard is so important. Go to climate strikes, join XR, write to your MP, protest outside banks – do whatever you have to do but ACT. Time is literally running out. It’s become a bit of cliche but I’ll say it again – there is no planet B. Could you live with yourself if your children asked you in 10 years, “Why didn’t you do anything?” I know I couldn’t.