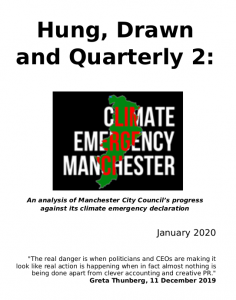 A new report reveals that Manchester City Council has achieved virtually nothing against the 23 elements of its ‘Climate Emergency’ declaration of July 2019.  Climate Emergency Manchester, a citizens’ group, submitted Freedom of Information Act requests to cut through the vague statements put out by the Council.  Its new report, “Hung Drawn and Quarterly 02,” paints a bleak picture of bureaucratic inertia and lack of political leadership.  On only one of the 23 elements does the Council receive a green light for good progress. On many others it is amber, and on a significant number, red.  The 38 page report can be downloaded for free as a word doc and as a pdf.

Chloe Jeffries, one of the lead authors on the report, said

“Since the last Hung Drawn and Quarterly report, in October, the Council has held no carbon literacy training sessions. Its leadership have given no speeches about the climate emergency except to those who are already concerned. Staff have been flown to Southampton, Exeter and Edinburgh. Climate change is an emergency, and the Council needs to lead, by word and deed. As well as pointing to serious inaction, our report makes concrete recommendations about what could be done, quickly and cheaply, to create momentum.”

The report will be launched at a social event on Wednesday 8th January at 7pm, at the Briton’s Protection Pub, 150 Great Bridgewater Street. This is an opportunity for all interested people to come, learn more, and get involved in the work of Climate Emergency Manchester. The following week there is another social meeting on Tuesday 14th, from 8pm at the Sandbar, 120 Grosvenor St.