Climate Emergency Manchester, with the help of allies, has produced a briefing paper about the  “non-plans” due to be scrutinised soon (2). The documents are supposed to detail Manchester’s proposed carbon emissions reductions, but really are vague, uncosted and inadequate. 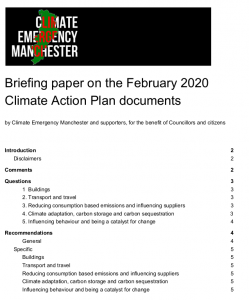 Ahead of Wednesday’s meeting of Neighbourhoods and Environment Scrutiny Committee (3) we are releasing a five page Briefing Paper with a number of questions and concrete recommendations.

“A year ago the council promised a detailed and comprehensive plan to 2038. Instead, the citizens of Manchester have been given uncosted and unquantified aspirations for the next 5 years. To show they are serious, the leaders need to bring a comprehensive, fully-costed and quantified plan back to NESC in July. They need to start “talking in tonnes” of carbon, instead of shifting percentages  They also must report quarterly on the City Council’s own emissions, in writing and verbally”

Climate Emergency Manchester will be at Wednesday’s meeting, alongside many concerned citizens.  Regardless of what the Scrutiny Committee calls for, the group will continue to campaign for real action on climate change, for deeds not words.

(1)  Climate Emergency Manchester is a non-partisan group of volunteers from Manchester. It aims to scrutinise the Council’s actual actions (as distinct from its fine words) and to propose policies to help the city cope with now-inevitable climate change and meet its international obligations.  Its next event – the launch of a report called “Manchester City Council and Climate Change for beginners” is on Thursday 13th February 7pm-9pm, at the Sandbar, 120 Grosvenor St.

(3)   The Neighbourhood and Environment Scrutiny Committee of Manchester City Council is made up of back-bench councillors. It meets 10 times a year.

(4) The Briefing Paper was produced by a small group of CEM members and allies, over the space of a few days.