Last March the head of City Planning (2) and a representative of the Manchester Climate Change “Agency” (3) addressed a group of councillors – the Neighbourhoods and Environment Scrutiny Committee (3).  It was four months after the Council had committed to the city of Manchester (from Charlestown in the north to Woodhouse Park in the south) being ‘zero carbon’ by 2038.  They presented a draft ‘Zero Carbon Framework 2020-2038.   Here’s the cover of that document, 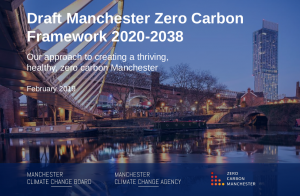 The councillors did what councillors on a scrutiny committee are supposed to do – they scrutinised.  They asked questions. You can watch it all here.

The end result was that the officers were to come back a year later, having done a lot more work, and worked with partner organisations, and present a final Zero Carbon Framework 2020-2038 AND also a plan for 2020-2022. 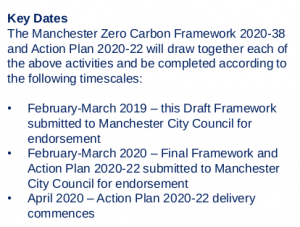 In the meantime, one of the recommendations in the draft framework was a programme to engage and support residents

(If anyone has seen this programme, please let us know, because a year on it seems that there’s a few things happening, but reliant on the motivation and networks of hopelessly overstretched individual councillors…)

And how, here we are in February 2020, seven months after the unanimous declaration of a ‘Climate Emergency.’

And what is being brought to Neighbourhoods and Environment Scrutiny Committee (4) on Weds 5th February, at its meeting in the Town Hall Annexe (second floor), from 2pm to 4pm? (Here’s the agenda, by the way. The meeting is open to the public, no need to book).

Given that nobody has said any different, you’d think there was no change of framework about the plan.  Sorry, change of plan about the framework.  You’d think.

And… instead, we get a five year “plan” (5)  for 2020-2025 that is both for the Council and the city in the same document. And bizarrely almost all mention of the 2038 framework gone like a fist when you open your palm (footnote memory hole)

However, the report from the council officer currently seconded to the Climate Change “Agency” does manage to get the history right (6).

It’s all quite bizarre and worrying. If those in charge fail to state unambiguously what the plan was – the commitment to bring a framework for the attention of democratically elected members whose job it is to make sure the Executive and the officers are doing their jobs- less than a year previously, or to explain the change of plan, well, it does not bode so well for the future (however long that might be).

We at CEM will be contacting the councillors on the NESC about the proposed plan that has been submitted (and the framework that was not).  We will be there next Wednesday, and we’re having a pre-meeting at the Waterhouse pub, 67-71 Princess St for anyone who wants to come with us.  We will have spotters cards for the committee (face to names and twitter handles) and other explanatory material.  We can’t promise it will be fun. In fact, we can promise you that it almost certainly won’t be.  But as we said a week ago, this stuff matters.

(1) It is a made-up word, a portmanteau of venting and investigating – geddit?)

(2) We at CEM have a fairly strict policy not to refer to officers who are not members of the eight Strategic Management Team by name, whether it is to say nice things or nasty things. That is because although they may or may not be implementing policy or even writing it, ultimately, the buck stops with the Strategic Management Team (the 8 top bureaucrats employed by the City Council).

(3) There are a couple of things to always remember about the Climate Change “Agency.” One is, it’s not an agency, it’s a Community Interest Company set up by Manchester City Council, halfway through the lost decade. It is almost entirely funded by it. Fun fact, CICs are not subject to the Freedom of Information Act, so can be as opaque and secretive as they like (some like it much).
Secondly, the Council has funded the “Agency” to the tune of over 400 thousand pounds, and has commissioned precisely ZERO analysis of its effectiveness or value for money.

(4)  Manchester City Council has 6 scrutiny committees, which are there to make sure that good policy is both made and, well, implemented.  Neighbourhoods and Environment Scrutiny Committee is one of the bigger ones, and its agenda is hopelessly overcrowded almost every meeting. That’s why a seventh scrutiny committee, dedicated purely to Climate Change (and possibly biodiversity) is urgently needed.

(5) It’s not really a plan, just a list of aspirations with the occasional vague date thrown in. That’s not the fault of the person or people who drafted it – how on earth are you supposed to make long-term plans for huge transformation when you have no idea where the money or other resources are coming from? But more of this next week…

(6) If I were writing this for Manchester Climate Monthly I would mutter darkly about Orwell’s concept of the “memory hole”. But I’m not, so I haven’t. No, wait..