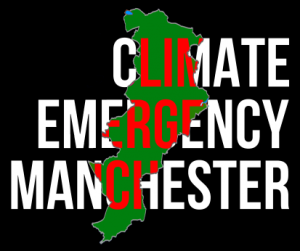 Every week it seems there is a new report – a pathway this, an action plan that. They all kind of meld into one, and you think, “ah, well, there will be another one along in a fortnight, so never mind.”

Please don’t think that about what we are about to tell you.

On Wednesday 5th February, at 2pm, councillors who sit on Manchester City Council will be looking carefully at a yet another document full of the right buzzwords – this time a “Zero Carbon Framework” for the years 2020 to 2038. For the City of Manchester – all 32 wards, from Higher Blackely in the north to Woodhouse Park  in the south.

No point in denying it – this “framework” is very probably going to be vague, bland and offensively inoffensive. Some members of Climate Emergency Manchester will privately say it is shit. Others will say it publicly. But they will all agree that this shit matters.

We know the temptation is to roll your eyes, and to laugh at the endless cycle of Groundhog Day, where Council officers promise they are just about to start doing something, and leading elected members get het up about the scepticism of backbench councillors and the public. We know that temptation, and we fight it daily. Most days we win.

We know that temptation. But this time, on so many levels, as Australia burns, as the seas rise, as the reefs die, it has to be different.

Right NOW we need you, dear reader, to do these things, more or less in this order.

Check your skills and availability

From now to Wednesday January 29th

For clarity: None of us is paid a penny for this work. We are volunteers. None of the core group of CEM is a member of any political party, is trying to build a political career.. We just want this city and especially its Council to actually – finally – take real action, as opposed to bluster and excuses, and the dressing up incremental action (much of it decided years ago) as if it were a response to a declaration of emergency.

We want your help. We need your help. Please, get in touch – contact@climateemergencymanchester.net

3 thoughts on “Yet another #Climate Plan for #Manchester…. But please read: this matters.”