Reader, it looked like Moss Side (1). There were fifty (yes, 50, half a century) people present for a meeting about what to do about climate change. And the make up was this: there was a smattering of old white folk (some of whom had been there since the 1970s and 1980s.). There were as many or more Afro-Caribbean folk, of same age or slightly younger. There were Somali and Horn of Africa folk of more recent vintage. And there were some (but vastly outnumbered)  young white professional types. And also, a sizeable contingent of school students (secondary and primary). It looked like Moss Side.

This is remarkable. It’s a testament to the social networks in the ward (which, by the way, is the best of the 32 wards in the City). It is also shows that the received wisdom (as peddled by some prominent councillors) that climate change is only of concern to middle class Didsbury types is… what is the word?… bollocks.

The meeting, by the way, was called and organised by Councillor Emily Rowles, as part of her obligation for having voted last July – along with all the other councillors, for a Climate Emergency.. 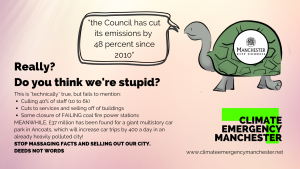 After a speech from the City’s Executive Member for the Environment (it turns out, apparently, that the Council has cut its emissions by 48 per cent since 2010. Could this have ANYTHING to do with a staff cut from 10 thousand to 6 thousand, the selling of many buildings and the cutting of many services, thanks to Tory austerity? Anyone?) there was a brief welcome from Grace, who leads the congregation (the venue was St James Church, on Princess Road).

Finally, Councillor Mahadi Hussein Sharif Mahamed gave a short and honest talk about how he was not one of the ‘usual suspects’ who usually bangs on about climate change, but that without people who look like him (he is originally from Somalia), the climate agenda will a) go nowhere and b) fail to tackle the related issues of (fuel) poverty, poor air quality and many many other issues.

The first half of the meeting – being sat in rows –  was over ten minutes ahead of schedule . Then it was over to small groups, with one devoted to waste and recycling (a huge issue), with the others on more general ‘what else is to be done?’ Most of the groups were about 6 to 8 people and all were extremely lively, with a requested focus on what can be done ‘in Moss Side.’ In the group I was in the conversation went from cars (too many, and not all belonging to Moss Siders- the ward is a daytime car park for people who take the bus into town, or work along the Oxford Road corridor), to leaflets, to proposals for a Moss Side Youth Climate Summit, a weekend festival of rappers, poets, a video and short story contest and much much more. At various points questions from the young people present were read out for the groups to consider.

All the ideas were captured on post-its or flipcharts, and will be typed up and emailed out. Meanwhile, the two Moss Side councillors present will be getting as much as they can into the next ward plan for Moss Side (copies of this mysterious document were available).

There will need to be many (many) more meetings, and the energy and enthusiasm of those present will have to be nurtured and sustained, with new blood and new ideas brought it. This is, of course, extremely difficult. If you live, work or study in Moss Side, please get involved. Without more hands on deck, more brains on the job, there is a real risk that in a year or two, the good start made this evening will have petered out…

Right now, at the level of the City rather than the wards,, the thing that we need to do is make sure the ‘Zero Carbon Framework 2020-2038’ is absolutely as strong as it possibly can be. You can find out more about that by reading this recent blog post.  If you can be at the scrutiny meeting where it is discussed (in the Town Hall annexe) on Wednesday 5th February at 2pm, that’d be great. If you can’t (because you work, you’re a carer etc etc), then no matter, get in touch with us at contact@climateemergencymanchester.net for other ideas on how to be involved…

Disclaimers about the tone

(1) I am so bereft by the fires in Australia, where I am from, and the lost decade of climate action in Manchester – and fwiw, the climate change action plan was 2009, not 2008 – that I might be looking for hope too hard

(2) I have known Councillor Rowles, who called the meeting, for several years, and always been impressed by her intelligence, integrity and (very) hard work.

(3) It’s early days. The proof of the pudding is in the eating. We’ve had lots of promises of action before. This time really does have to be different.