Only two voted against it.  The others? The other found a way to square their vote for a climate emergency last July (“the end of business as usual”) with… business as usual, in the shape of a 732 car park at Manchester Airport.

The Planning and Highways Committee met today.  The first planning application before them was for a car park for a beauty products company called THG. Yes, this is not, as the Planning Officer was at pains to point out,  a car park for passengers at the airport. It is not an expansion of the airport terminal or a new runway. It is just business as usual.

I (Marc Hudson) spoke against it.  There’s footage via this page.

And they mithered about marginal issues, avoiding the climate emergency staring them in the face. The one that last July they voted for. And today they voted again. And Jon-Connor Lyons (Labour, Piccadilly) and Gavin White (Labour, Old Moat) were the only opponents to another locking-in of high carbon .

We knew it would end like this.  It’s totally in-line with the Great Ancoats decision, the Hyde Road decision and other decisions yet to come.

The climate emergency? Flimflam and window dressing unless citizens make it otherwise.

Climate Emergency Manchester is trying to be part of that making it so. 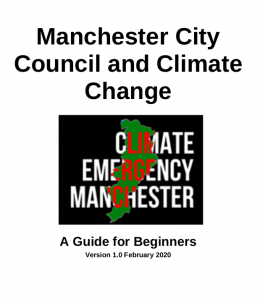 We have a meeting tonight – the launch of our fantastic new report “Manchester City Council and Climate Change for beginners.”  It’s at the Sandbar, 120 Grosvenor St, from 7pm to 9pm (or possibly later, if our sorrows learn to swim). We chose tonight because we knew this decision would go the way it did (you don’t have to be Nostradamus).  We wanted a gathering – no sitting in rows listening to worthies be worth – where people can share their rage, their grief, their joy in resistance. Where they can meet new allies, formulate new plans.  Do come if you can.

We have a petition, calling for a seventh scrutiny committee and a strenuous search for new cash, Wherever you live, please share it widely: if you live, work or study in Manchester City Council’s boundaries, please sign it and share it.

We have lots of other projects which need your active or passive support. We need graphic designers, speech givers, door knockers, meeting organisers, researchers, you name it. You can get hold of us at contact@climateemergencymanchester.net

If you sit this one out, we are all toast.  If you get involved, there is a tiny (but real) chance we won’t be.  That’s what an emergency means.