On International Women’s Day, Weds 11th March, the Women’s Environment Network is holding its annual lecture here, in Manchester. You can (and in our opinion should) get tickets here. WEN’s co-director, Kate Metcalf, kindly answered some questions… 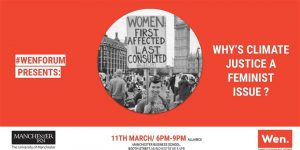 Wen (Women’s Environmental Network) is a UK charity that fights global problems around gender, health and our environment by taking action on issues affecting our bodies, homes and neighbourhoods. We work alongside communities supporting them to take action for a healthier planet.

b.  You have this event on March 11th. Two questions

a) in what ways is Climate Change a feminist issue?

The climate crisis is a key environmental, social, racial and gender justice issue. Climate change is affecting everyone but not in the same way. Women, especially women of colour, are more impacted due to different and unequal roles and status. The climate crisis disproportionately affects women and girls precisely because women and girls are already marginalised. In a patriarchal world, climate change simply magnifies the existing inequalities within our society.

Four of the biggest challenges facing our world today are gender inequality, racism, the climate crisis and militarism. We believe that they are inextricably linked and have the same root causes. Our patriarchal racist capitalist system is both a driver and a cause of the climate crisis. This system devalues both nature and women, people of colour and poorer communities. If we want to achieve a zero carbon society then we need to question and challenge existing power structures that are preventing this.  For us an intersectional feminist approach to climate justice does just this. It asks the right questions about power, looking at how other factors such as race, class, ethnicity, disability, age and location can affect your experience of your environment and climate change. Equality is at the heart of achieving climate justice. Any climate action must also address equality – gender, racial and social equality. We cannot achieve a net zero economy without addressing equality. When the problems are man-made the solutions are feminist!

Women are not equally involved in decision-making at all levels around the climate crisis. Major environmental and political decisions are overwhelmingly male. This affects the solutions adopted. In the words of Mary Robinson: ‘When it’s a male world you have male priorities.’ This is a missed opportunity as women are often leading the way in community based responses to the climate crisis. Yet their understanding, experience and priorities are often overlooked or invisible. So whilst they are the most active and forward-thinking, they are the last consulted.

To overcome this we need to ensure that diverse women have a seat at every table. That they are listened to and that responses to the climate crisis alleviate rather than exacerbate social injustice and promote greater equality.

For a net zero society we need to value the culture of care. Care jobs such as looking after children, the sick and the elderly and domestic work are predominantly done by women. This work is not properly counted in the GDP yet it underpins the whole system. It is often unpaid or under-paid. Care jobs should be seen as green jobs and properly paid, unionised and valued. We believe that low-tech solutions are equally important at high-tech initiatives.

b) who should come, what will they get?

Everyone is welcome at the event – women, men, non-binary people – anyone who is interested in this topic or finding out more about it! Feminists and non-feminists alike are welcome.

We will be asking participants about their priorities for climate action. This will feed into our Feminist Green New Deal paper that we’ll be launching at the COP26 climate talks in Glasgow in November.

There will be a range of stalls at the event to browse along with a networking reception. Participants will be able to hear from a range of speakers giving their perspective on this topic. Speakers include: Tina Rothery (The Nanas), Emma Greenwood (Youth MP for Bury), Guppi Bola (Workingonourpower) and Zarina Ahmad (CEMVO Scotland).

We hope that it will be an inspiring event visioning what a climate just future could look like.

c) Why come to Manchester for the event, btw?

Wen regularly hosts Wen Forum – feminism & the environment in conversation events, but this is the first time that we’ve held one outside London. We are very happy that The University of Manchester is hosting this event and are delighted to come to Manchester! Manchester seemed like the obvious choice for our Wen Forum event given its forward-thinking policies around the climate crisis, as well as having a big student population. We cannot rely on central government alone to solve the climate crisis so local and city level action is key. Manchester is in a good position to be leading the way on this.

c. how can people who live, work or study get involved in WEN’s work – what sorts of things would they end up doing?

As a small charity we really welcome new members and supporters! They are vital to supporting our work. We would encourage people to join Wen so that they can stay up to date about our various projects and campaigns.

Please feel free to get in touch if you have any questions.