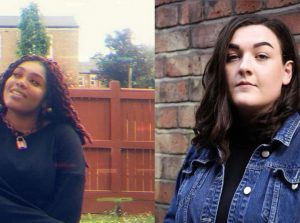 UPDATE: Event postponed because of coronavirus.  Once it is rescheduled, we will let folks know…

On Weds 25th March spoken word artist, Sian Clarke and actor-musician Tasha Down will be performing at Band on the Wall. We spoke to Rebecca from Brighter Sound, a creative music charity supporting them and other musicians around a climate change project called ‘Playing for Time’.

You can get tickets for the 25th March event here.

What is Brighter Sound? When did it start, why? What has it done in the last few months?

Brighter Sound is a creative music charity based in Manchester. For the past 20 years we’ve been supporting people at all stages of their musical journey – from early years to early careers. Our projects help musicians with everything from artistic and career development, to building communities and personal confidence.

In the last few months we’ve been working on a climate change project for young musicians called ‘Playing for Time’. As part of this we’ve commissioned two artists called Sian Clarke and Tasha Dowd to create original music in response to the global climate emergency. 18 year old spoken word artist Sian and 17 year old actor-musician Tasha were both selected following a public call-out in September 2019. It was clear from their applications how passionate they are about this topic. As part of the process they’ve been mentored by established artists, and will get to record their work professionally and perform it live at Band on the Wall on 25th March.

About the upcoming event on March 25th – where did the idea/motivation for it come from? What is the goal?

Sian and Tasha’s performances will happen as part of our regular Sing City Live night, an event where we showcase up-and-coming musicians aged 13-18.

The idea for ‘Playing for Time’ came about after speaking to the young people we work with. It was clear the climate emergency is an issue at the forefront of their minds. As the global climate strikes capture public and media attention, we wanted to explore what role music and creativity can play in young people’s voices being heard, and in promoting public understanding and action. While role models like Greta Thunberg lead the way in the political sphere, we thought it would be interesting to give young people a platform to express themselves in a different way; a creative way.

The goal of the event on 25th March is to showcase talented young artists but also to raise awareness of the climate crisis and motivate people into action. Music has a long history of being at the forefront of the environmental movement, political debate and protest, and can be a powerful tool for change.

Climate change events can be incredibly “worthy”, boring and depressing.  We’re pretty sure that’s not what you’re planning – how will your event be different!

Sing City Live is always a great event, with talented young musicians performing exciting and original new music. Given the subject matter, we think this event in particular is going to be really inspiring, emotional and uplifting. You can read more about what to expect in an interview we did with Sian and Tasha here.

What else is going on, with Brighter Sound, and other groups like it, that you would recommend people in Manchester who care about climate change, and think there should be a bigger/better cultural response, should know about, get involved in?

We’re really lucky to be receiving financial support for the Playing for Time project from C-Change, URBACT and the European Regional Development Fund. The aim of the C-Change network is to support arts and culture organisations in cities like Manchester to contribute towards local climate change action. There is a whole network of arts and cultural organisations called the Manchester Sustainability Arts Team (MAST) working together to cut carbon emissions in the city. HOME in particular is a great organisation to check out. They recently won an award in recognition of their commitment to environmentally sustainable business practices.

Anything else you want to say?

Everybody is welcome to come along to the event on 25th March. Tickets are completely free but we recommend booking in advance to avoid disappointment! The event will take place at Band on the Wall in Manchester. More information and the booking link can be found here. We hope to see you there!