On Saturday 7th March we passed two hundred online signatures on the petition. We also have around 400 on paper (we need a total of 4000 from people who live, work or study in Manchester.. to get a debate in full Council. Each time we get to a round number, we will do a “milestone interview.”  This time, it’s Dr Sarah Irving’s turn….

But before we begin – we are going to do a “Petition Blitz” from 20th to 23rd March, asking people to chivvy their friends to sign online, to collect signatures at their place of study/work/worship and also, gasp, talk to strangers (coronavirus willing).  More details to follow imminently…

I’m Sarah Irving, am academic who works on the nineteenth and twentieth century Middle East. I live in South Manchester and work at Edge Hill Univers 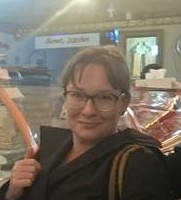 ity in Ormskirk. I signed the petition for lots of reasons, but mainly because any kind of action on climate change is vital (even if it may be too late), and because although Manchester City Council has made some good commitments on climate change its track record on all sorts of environmental and social issues tells us that it will only act on them if constant pressure is applied.

Yes, mainly via social media. I know that I have succeeded in persuading some people to sign, but I suspect that the clunkiness of the council website puts some people off – especially the fact that signing up for the petition section is such a faff, and even if you have an existing account for other council services you have to register a new one for petitions. I know of people who have signed it but not realised that you have to click a confirmation link in an email, or who in our surveillance-obsessed society find processes like this alienating.

If they need to be persuaded that there is a point in signing at all, remind them that it was the campaign surrounding a previous CEM petition which was one of the main factors in Manchester City Council issuing an emergency declaration in the first place. And if they agree to sign, remind them that they need to check their email to confirm their signature or it won’t register, or let people know that they have the option of signing on paper through various routes organised by Climate Emergency Manchester.

Probably to read the Quarterly Reports that CEM has been producing so that they have a clear idea of what progress is actually being made, because on past evidence they won’t be given a clear and honest picture by officials and elected members from the Council itself.

I think that question is very bound up with the dangerous absence of democracy in Manchester on a much wider level, because of the total absence of any viable opposition to the utterly embedded main faction which has been running the Council for nearly a quarter of a century. It amazes me that a council that calls itself Labour can do some of the things it has done over the years. I guess that means that if people in Manchester want change to happen on anything – whether it’s big-picture stuff like climate change or local issues like the planning monstrosities being pushed through for the Northern Quarter or on behalf of MMU at Ryebank Fields, people need to learn how to be active citizens in this city in particular. There are lots of materials out there about how to do activism and campaigning generally, but in a case like this what seems to be most effective is knowing in detail about how the Council works, which councillors have good or bad stances on what issues, what the factions are, who the employed officers are in each department, and how to implement processes like Freedom of Information Act requests or which council scrutiny committees can be used to apply pressure. It’s all very geeky and not very glamorous, but it’s people with these skills who are the ones who actually frighten this council into taking any kind of action.

It’s easy to dismiss petitions as being reformist, not changing anything, petty diversions, etc. They’ve probably been devalued even more by stupid websites like change.org and 38degrees which spew out petition after petition with no discernible effect and which seem to basically exist to harvest emails and donations for woolly NGOs. But like any tactic – be it direct action, lawsuits, demonstrations, whatever – they all have their time and place, and can be used to apply pressure at different points of an issue. The point of this petition isn’t that the Council will automatically act on its demands, but that they can be used to demonstrate public support for action on climate change, to expose political inaction, and to shame politicians into actually doing what they’ve promised.