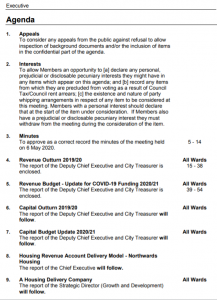 Manchester City Council has released two documents about its budget ahead of next Wednesday’s  virtual Executive Meeting. That meeting, on 3rd of June at 2pm will be entirely devoted to the budget implications of the coronavirus outbreak and is the stage on the way to a new budget being presented in July.  You can see the agenda and the links to the webcast here and to the right. More papers for the other agenda items are due to go up over the coming days.

spent  £322k in ICT to enable staff to work from home

From the “Revenue Budget – Update for COVID-19 Funding 2020/21” we learn that , as alluded to at the last Virtual Exec in early May (see our briefing paper here) that

Neither paper has any particular reference to climate change (perhaps understandably, given the enormous uncertainties in, well, everything. Item 9 of the budget is a paper (yet to be released) titled A Housing Delivery Company. Watch this space.

It is still not entirely clear which of the Council’s six scrutiny committees will be meeting later this month, and if/how they will scrutinise the emergency budget. It is likely that the Resources and Governance Committee (chair Sarah Russell, Labour, Northenden)  will want to look at the impact the pandemic is having on the Council’s finances now, and the major impact there will be next year (members of that committee expressed concern, a million years ago [i.e. February] that the Council was quite reliant on the Airport Dividend].  It is likely that the chairs of the scrutiny committees will want to see what happens and what is said at the Executive meeting next week before they decide on the agenda for their first meetings in the 2020/21 municipal year (the May ones are supposed to be taking place now, but have been cancelled).

Climate Emergency Manchester will work with other groups and individuals to produce a fuller analysis/briefing paper on this topic, which will be released early next week, before the virtual Executive.

The Council’s budget will be discussed tonight, as part of the Climate Emergency Manchester online meeting, from 7pm.  The agenda can be found hereIf you want to attend, send us an email to contact@climatemergencymanchester.net and we will send you the zoom link. This meeting will be recorded and posted to Youtube.

Some basic facts everyone should know about the Council’s budget (as far as we understand them – if we’ve got something wrong, tell us how, and we will flag that up below)

(NB As part of its self-audit using the Active Citizenship Toolkit, Climate Emergency Manchester has decided it needs at least two members of its core group at “expert level” on understanding/being able to explain the City Council’s budget

Currently we have a couple of people at ‘novice nudging towards practitioner’ level and nobody at ‘expert’. This, therefore this is an ‘absolute gap’ rather than a ‘single point of failure’. We are trying to close this gap by getting two people up to speed as soon as possible. If you can help us with that, please get in touch on contact@climateemergencymanchester.net with “it’s not rocket science, you muppets” in the subject header.