Today we are posting the first response to our post “On Fear“, from Robbie Watt. Thanks again Robbie!

It’s great to read your profound reflections. Thanks for opening up so publicly to the emotional features of engaging with climate change. I think it’s a helpful exercise for CEM, and you are offering a public service because this can help others – including myself here – to reflect.
I think Chloe’s point about worry being more common than fear is true for me, and probably many others. Marion echoes this with her comments about anxiety.
Fear at its purest leads to a fight or flight response to perceived danger. My strongest fear memory is of being surrounded by angry monkeys, and running away.
Climate change is more serious, but it’s a multi-decadal process which stalks the still uncertain contours of the future. The slow speed of its violence is a major reason why I don’t feel afraid in a visceral way. Another key reason is privilege.
So it’s more worry than fear. And it’s more worry than anxiety, because worry apparently is more cognitive, anxiety more physiological. Whereas over time I’ve suppressed more of the physiological difficulties that could be linked to anxiety about climate change, I’m not fooled on a cognitive level. I can’t allow myself to be fully deluded, nor can I banish all troublesome thoughts, as I have to teach and write about these issues for my job.
You do see people trying to mobilise fear through apocalyptic framings to generate a response. As a student in Glasgow in the 2000s, a campaign idea was to put flyers in the library with a dark fearful message on one side, and a bright message of ‘join our group’ on the other. We never did it, but these days XR carries the ‘business as usual = death’ message prominently, and they recruit well.
That jolt of fear can be mobilising. I was told about the scary features of the hot future worlds of 3, 4, 5, or even 6! degrees at a camp for climate action near Drax coal power station in 2006. I stared at the coal plant with tears in my eyes and resolved to close it down. Some of that momentary resolve has stuck with me. But note the setting – I was with a bunch of people who were actively seeking change. That can provide a sense of hope in collective action. In other settings, people might prefer to shut out problematic emotions like fear or anxiety, or might struggle if they don’t have a sense that things can be different.
That’s why it seems important that people are given opportunities to talk about the emotionality of climate change: people need to be able to process emotions, maybe even harness them. Maria Ojala writes about these issues and has a great paper about the emotional dimensions of learning about climatic and environmental crises. She tackles anxiety, and holds out for hope, so it’s sure to be controversial at CEM!

A bit more about Robbie: 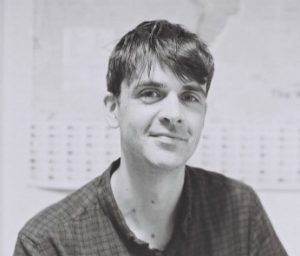 “I’m a Scottish migrant who moved to Manchester in 2012 to study for a PhD at the Uni of, now to be found working for their Politics department and walking the dog along the Mersey, thinking about environmental politics and climate change and how to train the dog, etc.  “