There are many many MANY reasons to be intensely frustrated/exasperated with Manchester City Council in general, and with its inaction on active transport in partciular.  That is beyond dispute by any sentient and rational observer of the shambles over the last weeks.  Nothing in what follows should detract from that.

BUT, there is a murmur going around in the Twittersphere that because the Executive Member for Environment, Transport and Planning is a director of NCP (National Car Parks) that there is a corruption-like-in-a-bad–Steven-Seagal-movie kind of way.  This is possibly libellous and certainly wrong, stupid and a dead-end.  The conflict of interest is NOT personal – it is organisational (to the tune of £3.7m per year, it turns out.)

So, we sent a Freedom of Information Act request in about this in on Wednesday evening. 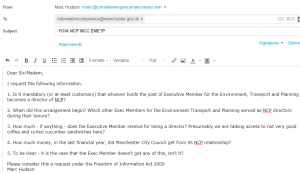 Thanks to a new system in place, we got the answers… this morning (that is some kind of record – normally you wait 20 working days).

… I have treated your request as if you meant to ask about NCP Manchester Ltd, rather than NCP Ltd. Councillor Stogia is not a member of the board of NCP Ltd.

1. Is it mandatory (or at least customary) that whoever holds the post of Executive Member for the Environment, Transport and Planning becomes a director of NCP?

No. The Chief Executive appoints two people to the board. It is his or her discretion who they are. Obviously it might be customary but we don’t hold any information on past customs.

2. When did this arrangement begin? Which other Exec Members for the Environment Transport and Planning served as NCP directors during their tenure?

This is exempt from disclosure under Section 21 of FOIA as it is already easily available to you by other means….https://beta.companieshouse.gov.uk/company/03643895/officers

3. How much – if anything – does the Executive Member receive for being a director? Presumably we are talking access to not very good coffee and curled cucumber sandwiches here?

Technically this is also exempt from disclosure as you are asking for personal data about a third party. But I can say that the directorships are not remunerated. (emphasis added by CEM)

4. How much money, in the last financial year, did Manchester City Council get from its NCP relationship?

5. To be clear – it is the case that the Exec Member doesn’t get any of this, isn’t it?

Technically, I can’t say she didn’t get ‘any’. She had none directly, but it went into a very big pot that the Councillor’s allowances were then paid out of, so she will have got a tiny percentage of it, just as I have in my wages.

The answers speak for themselves. The idea that on cycle lanes someone’s hand is in the cookie jar and that this is influencing their decision-making is just absurd. Spreading the insinuation weakens, rather than strengthens the push for sanity. Given the hole that Manchester City Council is digging for itself, that push needs to be stronger, not weaker. So if you see the insinuation being repeated after today, please reply with this blogpost.

Ultimately the reasons for the lack of boldness, openness, leadership “etc” are not to be found in membership of company boards but in 30 years of active surrender to an ideology of neoliberalism that seemed like it had won at the time (the mid 80s through to 2008) but which is clearly a zombie ideology, busy still eating the brains of whoever submits to it.

The reasons for this ideology’s persistence  are (mostly – and certainly not in this case) not to be found in accounts ledgers. The persistence of this planet-murdering foolishness is actually, to use a phrase we hear these days – “more complicated”.  Smearing individuals for (non-existent) conflicts of interest is a very large pothole on the cycle lane to utopia. It turns out that, when it comes to making our council do the right things, at speed there is…  now, what would the phrase be?…  how about… “no magic bullet.”

1 thought on “#Manchester City Council and car parking revenue – a personal conflict of interest? (Spoiler: NO)”