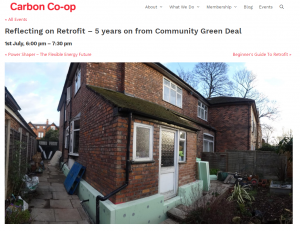 Next Wednesday, 1st July, there’s an online meeting about retrofitting and learning from the last five years. It’s organised by Carbon Coop. They submitted themselves to the CEM thumbscrews, and the following interview is the result-

Who is Carbon Coop and what have you been doing lately? What’s this online meeting on 1st July all about?
We are a community energy group based in Greater Manchester, that helps people and communities make large scale reductions in their home carbon emissions – mainly through whole house retrofit.

We’ve been extending our People Powered Retrofit Service, developing some innovative energy systems projects and working with municipalities to speed the energy transition.

In 250 words, give us the potted history of UK government support/lack of support/general fuckwittery around domestic retrofit.
Pre-2010 there were a set of pretty decent programmes to help improve energy efficiency across the UK housing stock, however, these were what is termed ‘simple measures’ mainly loft insulation top ups and new boilers – only a start on what we need to meet climate targets.

Post 2010, a lot of these were phased out and replaced with Energy Company Obligation (EOC), however, David Cameron came under pressure to ‘cut the green crap’ mainly from (surprise surprise) energy companies to reduce this funding in scope and scale, installations fell off a cliff and have never recovered.

Meanwhile, the government spent a lot of time and energy developing the Green Deal scheme for owner occupier households to retrofit their homes, but it was top down, relied on large contractors and promptly failed.

Since then, the government has been reticent of repeating the same mistakes, but it has quietly been supporting the development of a new standard on retrofit – PAS2035 – and funding a few tentative pilot studies to test new policy interventions.

What could be done at a Manchester City Council level/GMCA level to make it easier for private home owners to retrofit?
The city council could / should make planning process easier when installing Air-Source Heat Pumps. They could work with organisation like Carbon Coop to deliver retro-fits  on a neighbourhood basis and seek out grants from energy companies and/or central gov to deliver these retrofits.

What about the poor bloody private-renters?
This probably needs system change (mandatory minimum standards of energy efficiency and more reliable EPC system). I assume Carbon Coop would welcome working with decent private sector landlords (and tenants of course) but there are few incentives to drive this change as far as I can tell.

Anything else (preferably cheery and uplifting) that you want to say?
Cheery uplifting ending: a huge amount has been learned and retained within the Carbon Coop community. Householders have shared and pooled data and become self-taught experts or advocates for retrofit.

Wht does this do to low-lying farmland in the east of England? To the many coastal communities all around the UK? Closer to home, what happens to all the refugees who will have to leave Liverpool and the Wirral? Climate change will leave nowhere untouched https://www.theguardian.com/environment/commentisfree/2021/apr/13/sea-level-rise-climate-emergency-harold-wanless

And what correspondence from the MCC Exec Member to GMCA abt these?

For Manchester’s local elections, what do the major parties say about the climate emergency? We asked them all for a short video📽️

All this and much more can be read in the next Hung Drawn and Quarterly report, out tmrw.

For Manchester's local elections, what do the major parties say about the climate emergency? We asked them all for a short video.

Want more? Join our hustings on Monday at 7.45pm.
Tickets👉🏽https://www.eventbrite.co.uk/e/climate-hustings-manchester-elects-tickets-150316985149