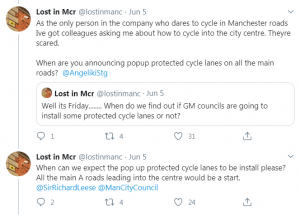 It got this reply

We can look back now, and see that as the starting gun for an extraordinary sequence of events – accusations of ‘fake news’ and ‘myths’, the refusal of a Scrutiny Committee to properly scrutinise, direct action by Extinction Rebellion, a protest, a billboard campaign and… well, more to come no doubt.

Curious about the authorship of the reply to this Tweet, we at Climate Emergency Manchester sent in a Freedom of Information Act Request… On Weds 1st July we got the reply.  Here is is, unedited.

Re: Request for Information – Policy about tweets from MCC account(s) – Reference Number: FOI/2339

Thank you for your request for information, which was received by Manchester City Council on 05/06/2020 and has been considered under the provisions of the Freedom of Information Act 2000 (“the 2000 Act”).

I am interested in how literally (as opposed to seriously) we  the voting public should take statements from official Manchester City Council social media accounts, and the process behind the tweeting of policy-relevant messages. That’s very broad, so let’s make it specific.  Let’s talk about this tweet. https://twitter.com/ManCityCouncil/status/1268915850909753344 on Friday June 5th 2020.

Please see below in response to your request

1. Was the author of the tweet an elected politician (if so, who) or was it a member of the media and comms team (if the latter, obviously I do not expect to be told their name, and am not asking for it.

The twitter response was given by a member of the communications team at Manchester City Council in line with a previously agreed media response on this matter and with good intentions to be informative and helpful.

2.  If the author was not an elected politician, what is the process when engaging in policy-relevant tweeting (as opposed to the more generic public health messaging which, quite rightly, is a large part of the MCC Twitter feed at present).

a) did the civil servant work from an agreed ‘script’

This is an agreed response that was developed with our colleagues in Highways and in line with agreed policy guidance.

b) did the civil servant consult (via phone/whatsapp/carrier pigeon) with the Exec Member for Transport or her delegated representative?

Our content is generally developed and agreed in advance – so we have previously sought advice on these policy decisions before we respond directly to queries from the public via social media.

On this occasion our communications team member did not consult or contact the Executive member for Transport or delegated representative before the response was generated as it had been previously agreed.

3. In general, should we take tweets to be the word of the relevant Executive Member?

Our social media content on whichever platform is in line with Council policies and decisions, and this response was generated from council policy to respond to a media enquiry regarding the MCC official stance on pop up cycle ways.

4. Please provide any documentation pertaining to how tweets are generated, and how Exec Members are involved in the generation of tweets.

This documentation is not currently held