Last Saturday many people braved the rain to show their support for pop-up cycle lane provision in Manchester.

All of these people turned out on a wet day to stand on the busy and polluted A6 to show their support for bike lanes. @AngelikiStg there are many people who really desperately need safe cycling and @ManCityCouncil are failing them.#CycleLanesJustice https://t.co/zYCbiadfdk

Today a letter is published in the Manchester Evening News, signed by many citizens, calling on the City Council take action and to be open about what is and is not being done. 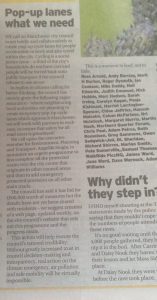 And today Climate Emergency Manchester can announce that the meeting of councillors to discuss this, agreed at last Wednesday’s Neighbourhoods and Environment Scrutiny Committee meeting, will not – as of today anyway – be filmed. It’s not even clear if it will be minuted.  So, there will be no public scrutiny of what is – and is not –  being done, short of the expensive (for the council), time-consuming and cumbersome Freedom of Information Act.

On Saturday CEM sent the following email to relevant elected members and officers.

Dear Councillor Igbon and Ms Worrall,
there is enormous public interest in the City Council’s position and possible actions around the creation of pop-up cycle lanes (which will of course benefit pedestrians, all types of cyclists and other road users) and is in any case a basic social justice issue.
According to the Executive Member for the Environment there are “myths”” ” fake news” and “misinformation” floating around.
Obviously one way to deal with this is to have a meeting which allows sufficient time for elected representatives to put forward specific questions and get specific answers, outside the time constraints of a normal scrutiny committee meeting.
My understanding from watching NESC on Weds 24th June is that a separate meeting with the Executive and councillors seems to be on the cards.
Can you give some indication of when this meeting will take place?
Will this meeting be filmed and either livestreamed and archived?
If not, why not?
Will the meeting be minuted?
Will Liberal Democrat and Independent Councillors be invited?

This morning the chair of Neighbourhoods and Environment Scrutiny Committee, Cllr LeeAnn Igbon (Labour, Hulme) replied with the following info.

All elected members have been asked to put any proposals for their wards into the executive member for consideration. Any proposals from the community to also be sent in, also members of the public can submit through the council web site.
The funding proposal figure and guidelines haven’t been confirmed at this moment so no decisions can be made for any submission.
The council isn’t operating a full elected member process with powers given to the executive in March due to the pandemic. Only executive and scrutiny meetings are live streamed at present. The meeting hasn’t been confirmed and all elected members will be involved in the process.

What you can do.

CEM says:  It is absurd – truly absurd – that citizens in Manchester are having to campaign (and take direct action) for something as obvious as pop-up cycle lanes (which are not, as precisely nobody has ever claimed a magic bullet), at a time when the social justice implications (many people in Manchester do not have access to a car), air quality benefits and carbon dioxide benefits are obvious. Manchester is screaming for real leadership – for clarity, openness and boldness. It is absurd that these (non)decisions are getting no proper public scrutiny. That absurdity is an invitation to despair: we urge you not to accept that invitation. We urge you to exercise your rights and responsibilities as citizens. If you don’t know where to start, email us at contact@climateemergencymanchester.net

1 thought on “Cycle lanes in #Manchester – no public scrutiny!! #CycleLanesJustice”