Yesterday the Manchester Evening News kindly published a letter by Calum McFarlane of the core group of Climate Emergency Manchester.

It’s about the need for scrutiny of decisions (and also indecision and non-decisions) by the leadership of Manchester City Council.

Jen Williams paints a bleak picture of Manchester City Council’s decision-making processes (“Anger at ‘behind closed doors’ council decisions” MEN, 2 July). She has spoken to various backbench councillors appalled at how planning decisions have been taken out of the hands of the elected committee members and given to the Chief Executive Officer, who is not elected by anyone.

But the anger extends to the mere voting public as well, and to decisions besides yet more ugly buildings in the city centre. As your reporters have written, for many weeks cyclists of all ages, abilities and motivations (commuting, leisure etc) have been urging Manchester City Council to act with boldness and imagination and install (very cheap) pop-up cycle lanes. Given how few people own cars, and how many will be forced back onto public transport without a decent alternative, this is a straightforward social justice issue.

We at Climate Emergency Manchester urged members of the Neighbourhoods and Environment Scrutiny Committee to list pop-up cycle lanes as urgent business at their meeting last week (Weds 26th). This didn’t happen and instead calls for cycle lanes were smeared as “fake news” and “myths.” There was little scrutiny of the Council”s (in)action, and now it appears that there will be a meeting of the relevant Executive Member and some councillors to “discuss” it. Behind closed doors, unfilmed, without published minutes.  This is not democracy, this is not the transparent and open leadership that the climate emergency needs. Councillors need to insist on change, not just for planning, but across the scrutiny system.

We can also confirm that there will be online-only meetings of all six of the City Council’s scrutiny committees,  from Tuesday 21st July to Thursday 23rd (it was not certain they would in fact be happening).  Of course, a seventh scrutiny committee, devoted to the issue that will dominate the rest of the 21st century/human history (whichever ends first), is urgently needed. If you haven’t already signed and shared this petition calling for that, please do so.

Three dates for your diary.

a) you’re not alone

b) this report Manchester City Council and Climate Change for Beginners may help.

Also, this graphic, done by CEM supporter Solvi, may help too. 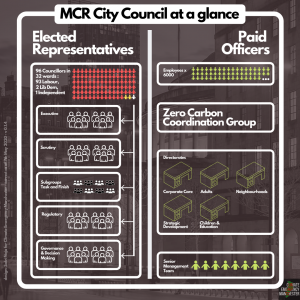