There are loads of very interesting and active folks in Manchester. We’re going to interview them all (n.b. this may take some time). Here’s our recent interview with Dr Elsa Devienne… 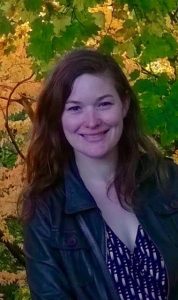 I’m a born and bred Parisian who somehow ended up living in Manchester and teaching American history in Newcastle! My neighbours still can’t quite put their head around what I’m doing here and why I speak with a French accent and a slight American twang. The reason why is that I met my English partner and that I was foolish enough to think that our move to the UK was temporary! I live in Manchester and work in Newcastle because we’re both academics and finding two research jobs in the same city is like hitting the jackpot. My partner works at The Christie and he has to be there every day (curing cancer, no big deal) while I can work from home part of the week so I’m the commuter, which means that it feels like half our earnings go to Transpennine Express and that I rant a lot about English trains on Twitter (thankfully there’s been less of that lately).

I defended my PhD in American history at the Ecole des Hautes Etudes en Sciences Sociales, an interesting institution in Paris where half of the student body is international and where interdisciplinary research is encouraged. For my PhD dissertation, I researched the environmental and social history of the Los Angeles’s beaches in the 20th century. I recently turned my dissertation into a book (for now it’s in French but I’m working on the English version for Oxford University Press).

I discovered environmental history while I was an exchange student in the US and I was immediately hooked. The idea that humans’ relationship to the environment has evolved over time was (and still is) fascinating to me. I like writing about beaches and coastal issues because it brings together different types of histories that I enjoy: environmental history, of course, but also social history, the history of race and racial and ethnic minorities, and the history of gender, sexuality and the body. It may seem like a trivial topic to research but, historically, the beach has always been the greatest scene for societies to play out contentious debates about what male and female bodies can do and reveal, and who can have access to nature.

2. When and how did you become aware that climate change was a super serious issue / threat?

I don’t think there was one “aha” moment but, rather, a gradual reckoning. I’ve always been interested in environmental issues from early on, even though I grew up in a big city, a far cry from what people imagine an environmentalist’s childhood should look like. I was living in Paris during the COP21 (when the Paris Climate Agreement was signed, which intends to limit global warming to 1.5 °C above pre-industrial temperatures) and participating in events and demonstrations heightened my awareness of climate issues.

Researching my book has also been essential in forcing me to confront our current crisis. When you work on beaches and coastal areas, it’s impossible to remain passive. Everywhere across the globe beaches and other fragile coastal landscapes such as marshlands are disappearing due to human-induced sea level rise. “Managed retreat” is often the only solution, but it is a fraught one, which causes much suffering for vulnerable communities that have lived on the coasts for generations. The more I read about sea level rise, erosion, ocean acidification and biodiversity loss, the more I realised that I couldn’t remain a passive observer and commentator of these phenomena.

My partner has also had a big influence on me: he’s convinced me to become a vegetarian and reduce my flying (although he wants me to stop altogether). I know that these individual choices won’t solve the climate crisis alone, but they are a form of everyday activism, reminding those around me that we are in a crisis and that we should be treating it like one.

Finally reading the work of activists such as Naomi Klein, Great Thunberg, Rebecca Solnit and others has also strengthened my resolve.

3. What lessons might today’s climate activists learn from 20th century environmental/urban history – what are the hidden stories that aren’t well known that you think deserve chewing on?

Environmental historians like Jenny Price (you can read a recent interview with her here; I think she’s brilliant) or Finis Dunaway (who recently penned a fascinating article on the iconic 1971 “Crying Indian” ad) remind us that individual actions alone are not enough. Turning off the tap when brushing your teeth, foregoing the use of straws or buying an electric car won’t solve the climate crisis and focusing on such small actions can actually divert the focus from the real problem and the actions that matter (like voting!). What we need is a system change rather than relying on individuals’ choices (which are always constrained by economics and other variables). We need cheap and accessible public transport, carbon-free housing, a nutritious and local food supply, free and sustainable healthcare, regulations on emissions, a ban on fossil fuels and investment in sustainable sources of energy. Systemic solutions for systemic problems.

Another important lesson from environmental history is that nature is not just “out there,” as Jenny Price would say, and it is not separate from us. It’s not just the beautiful national park you visit on weekends: it’s the tarmac the roads are made of, the type of sand used to make your house’s windows, the grass in your garden, the trees in your neighbourhood and the particulate matter you inhale every day. Environmental history demystifies the idea that we are separate from/in control of nature and that we can get away with messing up the world around us. We aren’t and we can’t!

Finally, environmental historians remind us that climate activists need to think intersectionally. It means that being a climate activist comes hand in hand with being feminist and anti-racist because these struggles are interconnected. Historically, racial and ethnic minorities have shouldered a disproportionate share of environmental nuisances in the US (and elsewhere). They’ve also fought back and environmental historians are now doing a better job at integrating their histories of resistance into the fold of what we classically thought of as the history of environmentalism (the creation of national parks, Earth Day, etc.) On this topic, I recommend checking out this text by Lauren LaFauci and Cecilia Asberg) on “environmental intersectionalism” and this article on race and nature (in the US context) by Douglas C. Sackman.

4. Ditto from the gender perspective.

Climate activists need to understand that our society is permeated by a male-centric perspective and that preserving it is bound up with protecting fossil fuel interests. Attitudes towards the environment are heavily gendered: riding a bike or recycling are commonly associated with being weak and effeminate while driving a big, gas-inefficient car or crowing about the need to “build, build, build” is considered the apex of masculinity and strength. Reading scholars that work at the nexus of gender and the environment can help activist recognise these fables as fictions.

At the end of the day, climate activists need to recognise that the climate crisis is a human rights issue. Its consequences are going to affect first and foremost the most vulnerable in our societies: people in the global South, indigenous communities, racial and ethnic minorities and women.

5. Complete this sentence “Good allyship with other campaigns, other people involves….

Compromise, time and the ability to listen to others.

Thank you for reading!

Standard disclaimer: The views of interviewees on the CEM website do not necessarily reflect the views of CEM.

this person might die. tomorrow it could be me. the day after it might be any of us.

great ancoats street is a carbon hell corridor through this city and was marketed as a £9.1m pedestrian paradise