We’re running interviews with folks who are supporters of CEM’s work, and those involved in campaigning for a greener and more socially just Manchester. Same questions every time. This time, it’s Stephen Pennells. 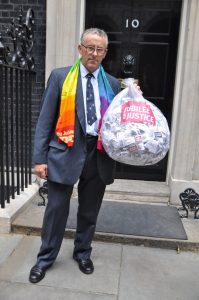 I’m Stephen Pennells, born in Sevenoaks, Kent,  I came to Manchester as an economic migrant when 34 and needing a trade and affordable housing.  The trade qualification was a specialist TESOL teacher training that would enable me to work in a UK school or abroad.  My wife and I had lived in 20 different homes in 10 years of marriage and with three children we wanted security and employability.  We stayed because we hadn’t a good reason to leave- the kids were happy in school, I got local employment and we bedded down in a local church.

When and how did you first come to realise that climate change is such a serious, urgent situation?
Well, having campaigned on other global poverty issues (Debt and Trade- as I still do), I read the NGO briefings from Christian Aid and World Development Movement in 2007 to pressure Ed Miliband over the Climate Bill and it made sense.

What has been your experience (positive, negative, whatever) of involvement in environmental groups?
It’s mostly been through shared lobbying and being a body with others- mostly positive (mass lobbies, marches and rallies- size matters!), but sometimes a bit disappointing- people worry too much about the local- “just us”, not global justice.  And to be honest some seem more concerned with pandas and polar bears than people (no names, no pack-drill)!

Many (myself included) don’t have the persistence to really follow through- shouting a slogan in St Peter’s Square and waving a placard with one’s mates, perhaps banging off some “clicktivism”, but not bracing up to an individual letter, and a follow up letter, and perhaps a follow up to that to really bore down on those who may blank the protest.  To few of us brave the MPs surgery face to face or follow the links and search out unheard voices for ourselves.

At the same time, some (environmental) groups and campaigns can come over as arrogantly so right it’s no wonder targets don’t listen or react positively.  We need to listen and to ask the difficult questions- “why do you say that?”

Why did you start to get involved in CEM? What have you done? What has been your favourite bit?
Hmmm…. I’m not at all sure I can claim to be involved with CEM (as an institution) much beyond getting a (very) small number of petition sheets signed.  If I’ve contributed it may be in getting letters sent to the M.E.N.- even when not published they should register with the Editor, raising issues so others get a look in.

What other projects are you involved in that you would like to give a shout out to?
For me it’s a moral imperative to put the influence of our (national) house in order; not only cutting our emissions, but also those we cause and the suffering caused indirectly by institutions Britain has influence in.  This means tackling international debt with the Jubilee Debt Campaign, tackling “corporate neo-imperialism” (the economic pressures brought on poor countries).

Likewise we need to take back control of the patterns of international trade our government is currently promoting which include “corporate (controlled) courts”, aka “Investor State Dispute Settlement”, institutions that have seen democratic governments bullied for wanting to move away from gas, coal, oil and nuclear power businesses.  I do this through Global Justice Now.

Using the Active Citizenship Toolkit – What things are you expert or ninja at, and would you like to share those with others?
Hmmmmm….  not sure about “expert”.  Like one of your core group members, I’m responsible for a lot of letters to the M.E.N., but have also written articles for other sympathetic publications.

What things would you like to be better at (call out for help)
Big question!  Putting together videos more efficiently so one has a worthwhile stream of local views relating to wider situations would be one; getting people to move beyond expressions of concern to exertion and giving up their time to causes would be another; thirdly getting my (and other) MPs to react to letters with the promptness Sir Gerald Kaufman used to would also cheering.

Complete this sentence:  A year from now, “success” for CEM looks like –
… the council and our parliamentarians not only declaring a Climate Emergency but both turning down proposals that were not furthering it, and taking the initiative to lead by clear example in tackling ecological breakdown and climate chaos.

Anything else you’d like to say?
For me it’s primarily an issue of compassion and sympathy.  I was fired up /rejuvenated as an undergraduate reading theology when my mind was opened.  It was opened further researching ancient texts when I learnt to challenge, cross-refer and ask “why?”  Living in (apartheid) South Africa showed me I had privilege and should use it; teaching brought me anti-racism and whilst I’m a product of my background, I’m still called to respond to crisis.  If not me, who?    As John’s Gospel  (11:16) says: “Let’s go!”