What to do about climate denial? If you engage, you help to  continue the denialist lie that there is a real debate over the existence of man-made global warming. If you ignore it, it a) festers and b) seems unchallenged.

Mostly at CEM we ignore it.  However, last week, a letter appeared in the Manchester Evening News (in response to one of ours) that trotted out some of the standard denialist ‘arguments.’  You can see it on the right of this blog post

In our reply (published today in the MEN) we promised to respond online to these four attempts at confusing people about the existential threat members of our species have created for not only the human race but almost all other species on this planet (and that’s not an exaggeration, btw). 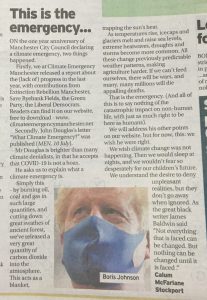 Claim: “The UK has had the coldest June and July temperatures in 2020 for many years.”

Reality: The clue is in the name – global warming.  What is happening in one country, in one month (and the letter can only have been written as late as 9 July – a bit early to be spotting a trend for an entire month) is simply irrelevant. If and when those who are trying to communicate the urgency of climate action look at one single data point, they are accused (often rightly) of ‘cherry picking’. That Mr Douglas has done this is not surprising.  He could also have pointed to May 2020 was the sunniest, and one of the driest months since records began in England – but that wouldn’t have helped his tall tales (and to be clear – on their own, these stats mean little. It’s the long-term – 30 year plus – trends which matter….)

Claim: “Between the 1940s and 1970s world temperatures dropped sharply whilst CO2 levels rose, this wouldn’t be possible if CO2 really did cause global warming.”

Reality: Ah, at least now we are onto global temperatures rather than just the UK. Sure, what he says in the first half of the sentence is true. But then why doesn’t Mr Douglas not mention that this is universally acknowledged, and already explained. Two points – the CO2 increases were relatively minor in that period (we weren’t burning as much fossil fuels as we have been recently) AND the effect of warming was masked because of the amount of sulphates we were releasing. Before better environmental regulation came along, very dirty coal, with lots of sulphur, was being burned and released straight into the atmosphere. These sulphates made clouds whiter, and more of the sun’s energy was bounced into space before ever reaching the ground.
Everybody who is seriously studying climate change knows this. Mr Douglas is either unaware of this (which is interesting) or hoping that other people are unaware so that he can pull the wool over their eyes. In neither case is he credible or worthy of trust.

Reality: Well, CO2 levels are higher than they have been for 3 million years. Check out this from a Professor (and we for one haven’t had enough of experts) writing recently on The Conversation

“The last time global carbon dioxide levels were consistently at or above 400 parts per million (ppm) was around four million years ago during a geological period known as the Pliocene Era (between 5.3 million and 2.6 million years ago). The world was about 3℃ warmer and sea levels were higher than today.”

So by “ice ages” we’re not talking about the last one, with the wooly mammoths and the frostbitten Neanderthals.  So, that right there should tell you something.  We’re going back many many millions of years indeed. Mr Douglas is probably referring to the Ordovician glaciation  This basic explainer from Skeptical Science is helpful, and this comment in the thread beneath is worth noting –

“the glacial/interglacial cycle plays out on a 26000 – 100000 year timescale. In contrast, we’re doubling CO2 on a timescale of a century or so. We’re also pumping out CH4, N2O, halocarbons, and other greenhouse gases. Thus, if you look at the actual magnitude of the radiative forcings, over the course of the 21st century the increase in greenhouse gases has a much larger forcing than any changes in TSI, Milankovich, etc.”

False claim: “the medieval warming period has over 1000 peer reviewed studies showing it was warmer than today”

Reality: Ah, where WOULD denialists be without their Medieval Warming Period? Actually, while the MWP saw “unusually warm temperatures in some regions, globally the planet was cooler than current conditions.”  And over 1000 peer reviewed studies, huh?  Riiiiiiight…

It has taken about 60 minutes to research and write this post. This is another reason not to engage with climate denialists – it is time and energy that could be used for productive things, such as the Active Citizenship Toolkit, or encouraging people to sign our petition for a seventh scrutiny committee, devoted to climate and environmental policy.

We will just repeat what we said at the end of the letter the MEN kindly published today.

… we wish he were right. We wish climate change was not happening. Then we would sleep at nights, and we wouldn’t fear so desperately for our children’s future. We understand the desire to deny unpleasant realities, but they don’t go away when ignored. As the great black writer James Baldwin said “Not everything that is faced can be changed. But nothing can be changed until it is faced .”