Council bureaucrats and officers are continuing to ignore basic questions and an attempt at dialogue about the direction of climate policy, despite promises to engage.

Weeks ago the members of the Manchester Climate Change “Partnership” (1) wrote an “open letter” to Richard Leese, leader of Manchester City Council since 1996. The letter was, like previous ones, full of fine words about things that “should” be done on climate policy.

We at Climate Emergency Manchester produced a detailed response to this, with a series of questions to the Agency and to Leese.

We sent it to them both on 30th June, attaching a copy of our letter.

On Friday 10th July – which happened to be the one year anniversary of the Climate Emergency Declaration –  we wrote again. This time we got a reply – we were promised by a council bureaucrat on eternal-secondment to the climate change “Agency” that – well

Thank you for your letter. I will raise with the Chair of the Manchester Climate Change Partnership and come back to you in due course.
Regards
[xxxx]

Because the Agency is actually just a public relations outfit, devoted to giving the appearance of action, and providing cover for the Council’s first and only priority – inward investment. It isn’t actually about driving real action, or even about answering awkward questions. It sticks its fingers in its ears and says LA LA LA CAN’T HEAR YOU.  Why do we say this? Because they even blocked CEM on Twitter. 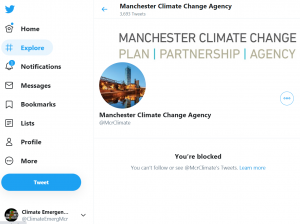 We asked why and were told.

This is Manchester. We do things differently here.

(1) A hand-picked group of organisations with needs to burnish their credibility on climate change, and a helpful unwillingness to speak out against Manchester City Council.

(2) It’s actually a community interest company set up by and funded by the City Council. The main advantage of this for the Council is that its “agency” is helpfully immune to Freedom of Information Act requests

2 thoughts on “Still no answers to basic questions from Manchester #climate “Agency”, 2 days before a 90 minute “conference””