Below is an account, written by Juan Villanueva, of the latest Neighbourhoods and Environment Scrutiny Committee meeting, held this afternoon (see our briefing note, published Monday, here). NESC is one of six scrutiny committees of Manchester City Council. Its remit is enormous, and it simply does not have the time in its schedule to give climate change the attention required. A total of five or six hours a year is not enough.  A seventh scrutiny committee, dedicated to climate change, is urgently needed. If you live, work or study within Manchester City Council’s boundaries, you can sign the petition calling for this. If you’ve already signed, or can’t because you are not eligible, please share it with everyone you know who is eligible, and urge them to sign.

Today, Wednesday 22nd July, the Neighbourhoods and Environment Scrutiny Committee met. It was their last meeting before the August break so we expected that they would talk more about MCC’s role in responding to the Climate Emergency. The council unanimously declared a climate emergency last July and since then has done… well, check out yourself the report which Climate Emergency Manchester published on the 1st anniversary of the declaration. CEM will produce another, more detailed report, in August. 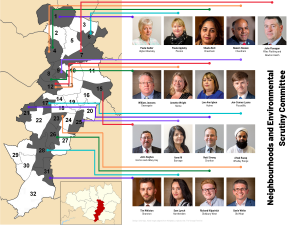 The truth is that under these exceptional circumstances, after an unprecedented lockdown, the council has a lot to do. Therefore, we believe that just one committee to scrutinise neighbourhood affairs and environmental issues is not enough. It is for this reason that Climate Emergency Manchester has created a formal petition to give climate the attention it needs with a 7th Scrutiny Committee .

The committee dedicated one hour to update on neighbourhoods after COVID-19
breakdown, and we don’t want to lighten the importance of this. But the fact remains that they only talked for around 30 minutes about the climate emergency.

At the beginning of this section of the agenda, the Executive Member stated all the difficulties and inevitable delays due to the national lockdown. However, in response to a question from Cllr Annette Wright (Labour, Hulme) asking what progress had been made against the specific promises made in the emergency declaration (not clear from the paperwork accompanying the meeting), she claimed a number of broad points. The Exec Member reeled off a long list including how MCC was working with several partners across the region to even push forward the target of being carbon neutral before 2038, how they have reviewed all policies, how they report regularly to NESC, how they have investigated how to do mandatory that future local developments will be carbon neutral, and they have pushed TfGM and GMCA to decarbonise public transport… This is a lot of talking about what can be done but does not indicate that much has been done.

The Exec Member also mentioned that MCC are working with the Tyndall Centre to include the Airport emissions in the city carbon budget. “We are investigating the best way to include aviation in our overall carbon reduction program in the long term”. There was a hint of a retrofitting scheme after the government announced the Green Home Grants for retrofitting houses across the country. However, the report on this was delayed until the next meeting when further details will be published from the government. The Strategic Lead for Policy and Partnerships said that MCC expects to help cover up to 20% of the cost. They will “look at £5,000 voucher for homeowners and we think that landlords who have to do the most basic efficiency measures (…) could get the highest value voucher, £10,000”.

Also, the Head of Policy and Research offered an update on the Local Plan and new development. New construction will have to achieve certain environmental standards such as energy efficiency, water management, performance and design or impact on ​biodiversity. MCC hope that new plan will “contain the highest possible specifications. It does have to comply with national guidance, but we want to be very ambitious”.

It is always worth remembering the link between climate change and social justice. Close to the end of the meeting, Cllr Azra Ali, (Labour, Burnage), raised a question about the process about Clean Air. She was told that the next stage will be held in October. A request for an Equality Impact Assessment was noted and the need for a meaningful consultation “to pick up the needs of the very diverse
community across GM”.

Finally, maybe as a sort of bright side, we could note a point where Cllr Kirkpatrick (Lib. Dems.) and Angeliki Stogia agreed: the poor response from the Greater Manchester Pension Fund to divest invest from fossil fuels, one of the key points on the Climate Emergency declaration. Cllr Stogi said the next action will be to send another letter co-signed by other councils in Greater Manchester.