Manchester City Council bluntly admitted in June, at the height of campaigning on improved cycle provision, that it was “not proposing any pop up cycle lanes”.

Citizens only know this because of documents from a different council (Tameside): Manchester City Council has chosen not to respond appropriately to Freedom of Information Act  (FOIA) requests from its own residents.

Thanks to a FOIA submitted by CEM, we can now reveal that on 12 June the head of Engineering Services at Tameside Council emailed someone (we don’t know who, their name is redacted) at Manchester City Council.  The Tameside officer had already tried contacting this Manchester officer by phone. They wanted to discuss extending the improvement of walking and cycling facilities  into Manchester city centre. 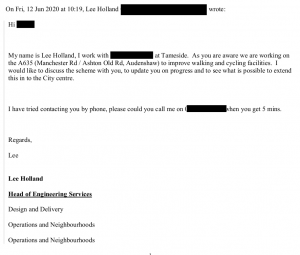 Seven minutes later came the reply.  Manchester is “not proposing any pop up cycle lanes at the current time.”

For months ordinary citizens have been imploring Manchester City Council to act boldly and imaginatively in installing pop-up cycle lanes. They have pointed out that this is a straightforward social justice issue: many people do not own cars, or cannot afford to run them. If they are going to go to work they have to brave the roads on bikes or crowd onto public transport.

In return they have been dismissed as “the cycling lobby”, and told that they are spreading myths. Their arguments were misrepresented (as in, a strawman was created) that they had said that pop-up cycle lanes were a “magic bullet”.

In the midst of this total failure of leadership, a month ago, various citizens wrote Freedom of Information Act requests to Manchester City Council, asking specifically

The replies were short, identical and very unhelpful.

“The Executive Member for Environment, Planning and Transport has confirmed discussions took place regarding emergency active travel with other local authorities. However, the details of conversations were not recorded and so the Council does not hold this information.”

Fortunately, we ALSO submitted FOIA requests to the eight local authorities which share a border with Manchester City Council, which is why we have any information at all.

This is a classic example of why we urgently need much better scrutiny. One element of that is a seventh scrutiny committee devoted to climate policy. You can sign the petition here if you live, work or study within the City Council’s boundaries. Please share it widely with your friends, family, work colleagues etc.