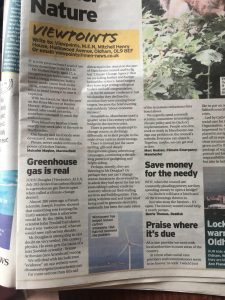 The MEN has kindly published CEM’s latest letter, which was a group effort.

Two kinds of climate denialism are afflicting Manchester. One is pitiful, the other deadly.
John Douglas denies that carbon dioxide is a greenhouse gas (but is upset when called a climate denier). Almost two hundred years ago a French scientist, Joseph Fourier, showed that something was keeping the Earth warmer than it otherwise would be. By the 1860s, Irish scientist John Tyndall had shown that it was “carbonic acid”, what we would now call carbon dioxide.  Mr Douglas is attempting to cast doubt on very settled 19th century physics. He even gets the name of a later Swedish scientist – Svante Arrhenius (not Arrenhuis!) wrong. We will deal with his ludicrous “evidence” on our website www.climateemergencymanchester.net
Far more serious than this sad distraction is the denial on the part of Manchester City Council and its fig leaf “Climate Change Agency” that we are falling further and further behind the science-based targets they have kept setting with great fan-fare and self-congratulation (as per my last letter, published on Thursday 23 June). At the ninety minute “conference” last Wednesday they declined to mention they were missing these targets, because the brief meeting was suddenly “about economic recovery”. Nonetheless, Manchester used a quarter of its 21st century carbon budget in the last two years.  There is precisely no attempt to change course, to do things differently, or to alert people to the scale of our current shortcomings. There is instead just the same smiling, glib and deeply disingenuous glossy advertising campaigns, continuing a decade-long pattern of gaslighting and bright-siding.
Perhaps, secretly, they are listening to Mr Douglas?  Or perhaps they just can’t change course, because to do so would be to admit they had spent the last ten years taking (carbon) credit for austerity which cut their staffing, services and building estate. This, along with less coal and more wind being used to generate electricity nationally has been the main cause of the emissions reductions they boast about.
We urgently need a seventh scrutiny committee to investigate climate policy and its (lack of) implementation. People who live, work or study in Manchester can sign our petition on the Council’s website. Everyone can share it. Together, maybe, we can get real action.

And, quickly, because life is short, that promised response to John Douglas’ letter of the previous day

(we did a similar job on a previous letter by him a couple of weeks ago).
Claim: A study released this week by experts at Barcelona University reveals that the Roman Warming period from 1AD to 500 AD was the hottest period in the past 2000 years, C02 levels were lower than now but the climate was much hotter.
Reality: The study, released a month ago is here.  It is a real study, in a real journal. Only problem is, it doesn’t “debunk C02” and it doesn’t make the claims Mr Douglas wants us to believe (although he probably does believe them himself). This is typical cherry-picking and mis-construal of findings. 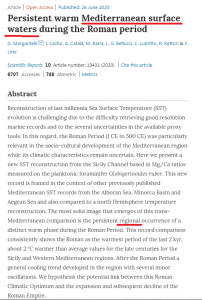 Instead, the study talks about “persistent warm surface waters”, not “the climate”. And is about one region, not the whole planet. Other than that, well, in principle.…no.
Claim: The idea that C02 causes warming is a very old and flawed theory from Arrenhuis from the 19th century
Reality:  Svante Arrhenius was not the person to propose the theory of greenhouse gases (and that word has a different meaning when applied to science than in “popular understanding, where it basically means ‘educated guess’). He used it to make calculations about what would happen if the amount of C02 in the atmosphere doubled. It took him a year, and his results were pretty accurate. He thought this process would a) take a very long time (he didn’t foresee quite how much coal, oil and gas we would burn in the 21st century and b) be a a good thing, since it would “improve” the climate of Sweden – fewer nasty cold winters.
Also, am not having a go at Mr Douglas’s spelling or punctuation (people in glass houses etc), but getting the spelling the name of your purported evil scientist wrong signals a certain lack of attention to detail. If I told you I had cast-iron proof that John Fitzwilliam Kennedy had been the victim of a conspiracy in Dalas on November 22nd 1963, you’d probably be sceptical.
Claim: and promoted by the UN who’s climate model predictions are wildly inaccurate.
Reality:  The UN itself doesn’t have climate models. The UN Intergovernmental Panel on Climate Change (IPCC) relies on a number of different climate models from various universities and research facilities (often tied to military usages, as historically has been the case).
People have been attacking the models as “wildly inaccurate” for decades – it’s a favourite denialist trope –  but sadly they’re mostly bang on the money.
If Mr Douglas wants a big fat book to read about computer models, climate change and reality, he could do worse than Paul Edwards’ A Vast Machine: Computer Models, Climate Data, and the Politics of Global Warming. If anything, we should worry about the non-trivial risk that some models might be under-estimating the speed and scale of change (but at the same time, we don’t need to go full-McPherson. See here too for a good response to the “Deep Adaptation” claims.
Mr Douglas can and will continue to cling to the idea that he is some sort of brave truth-telling rebel.  There is a vast literature about the psychology and demographics (hint – mostly old white men) of denial. Far more important is doing something about the escalating crises. The people in charge of Manchester’s climate policy haven’t been doing that, aren’t doing that. We need – among other things – a seventh scrutiny committee. Please sign and share our petition…