Update: 29/07/20 2038. This evening Pooja received  a letter with an apology and some non-specific statements in response to her specific questions from July 10th. How much longer she would have waited without the publication of this blog post is an interesting question. If YOU have written to your councillors, please get in touch, whether you have heard back from them or not – contact@climateemergencymanchester.net

A year ago all 96 councillors of Manchester City Council voted to declare a Climate Emergency. The motion they voted for contained many fine commitments. One of them was that local action and involvement would be encouraged. At the recent 90 minute “conference” the message was given “write to your councillors.”

On the one year anniversary of the vote (Friday July 10), Climate Emergency Manchester had already encouraged people to write to their three councillors (Manchester has 32 wards, with three councillors per ward, normally serving a four year term before being up for re-election, if they are re-selected as the candidate by their local party).

Several people we know of (and others besides) contacted their councillors. One of them is Pooja Kishinani, a student at University of Manchester. From India, she is desperately concerned about climate change and what is being done.

She wrote to her three councillors on July 10th. Here are screengrabs. 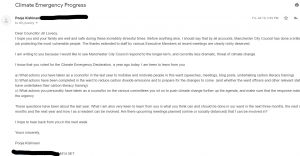 She also  tweeted to her councillors about this, and one of them even retweeted it. 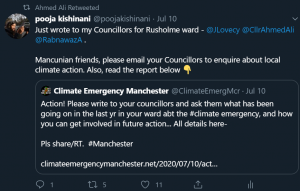 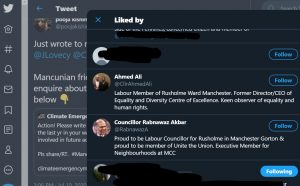 None of them contacted her via Twitter to say they had not got her email, so she assumes they all did. (1)

No reply has been received from any of them. On Tuesday 28 July she resorted to using the Freedom of Information Act. She knows this costs money, but she sees no choice “The Council tells me to contact my councillors, which I did. Are they expecting me to shrug my shoulders and give up? Climate change is far too important for that.”

On Wednesday morning the Council replied with a standard email 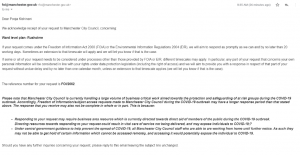 When the reply to this Freedom of Information Act request comes in (and it may not – for once – take 20 working days), we will report on what it contains (ideally there will be answers instead of mere replies).

Do you have a similar experience?  (One of the core group already has) We’d love to hear from you. Our email is contact@climateemergencymanchester.net

Also, please sign and share our petition calling for a seventh scrutiny committee, devoted to climate change. We are holding an online meeting this coming Monday, 3rd August 2020.

(1) If the councillors did in fact write back, we invite them to provide evidence. We will a) apologise, b) publish on this post, and c) give them right of reply.

1 thought on ““Write to your councillors” is #Manchester climate boss advice. But when people do…”