Climate Emergency Manchester has a new core group member!  We are beyond delighted to welcome Pooja Kishinani, who has already written about how the media’s racial bias underminestthe youth climate movement, and also local climate action (Rusholme, since you ask).

Here she expands on where she comes from, what she is doing, why and how. 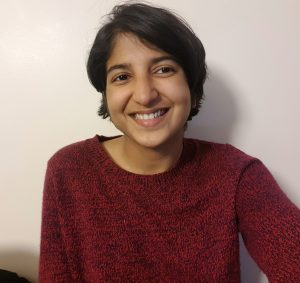 A few words about me – who I am, and why I care about climate change
Hi, I’m Pooja and I’m the newest member of the Climate Emergency Manchester core team. I grew up in Bangalore, a large city in south India, before moving to Manchester to pursue a degree in Politics, Philosophy and Economics. The climate crisis has been a constant source of worry for me ever since I began to witness its devastating impacts in my home city. Bangalore’s green cover has sharply declined from over 68% in the early 1970s to around 6% in 2017, which has largely been the result of unplanned urbanisation. The depletion of green cover has also had a detrimental impact on the city’s climate – extreme weather events have become more frequent, and the city also faces an acute water crisis which worsens each year. Bangalore’s rapid transformation also made me more conscious of the injustice of the climate crisis – the heaviest burdens are borne by poor and marginalised communities who have contributed the least to the problem, and are also least equipped to cope with its staggering impacts.

“the climate crisis is not someone else’s problem to fix – it is a collective problem which necessitates collective action.”

To me, the climate crisis has never been some abstract phenomenon that will materialise in the distant future. It has always a real, urgent threat that needs to be at the forefront of every decision we make. Even as I grew terrified of the future we are collectively heading towards, I could not justify looking away from the impacts of the climate crisis. To cope with my climate anxiety, I started volunteering with student-led organisations that focussed on the intersection of climate and social justice. I raised funds for local campaigns and I also facilitated group discussions among primary school students, starting a dialogue on climate change that was often excluded from the official school curriculum. The key lesson I learnt during these early years of volunteering and activism was that the climate crisis is not someone else’s problem to fix – it is a collective problem which necessitates collective action. This might sound trite, but I truly believe that we are capable of bringing about significant change when we persist in our fight for a more just and fair society. And the current climate justice movement will be a long, long fight.

How I became involved with Climate Emergency Manchester’s work
During my time in Manchester, I’ve actively participated in climate protests and I also ran three sustainability-related volunteering projects in my role as the Environmental Projects Coordinator at the Students Union. I had no idea that Climate Emergency Manchester (CEM) existed until five months ago, when I came across their petition to set up a Seventh Scrutiny Committee devoted to Climate Change. I also became avid follower of their regular blog posts and reports, which scrutinised the City Council’s work. I knew that the Greater Manchester Combined Authority had set a net-zero target of 2038, but I was unaware of the progress being made to achieve this goal. (If you’re clueless too, I highly recommend reading this report. Warning: you won’t be too pleased.) I also met the CEM team virtually in the middle of June, where I learnt more about the CEM’s broader work – its history, current projects and future plans. I supported CEM by promoting their work on social media, giving feedback on some reports, writing to my councillors (for the first time!) and occasionally contributing a guest blog post.

Not only was I learning more about local climate policy and activism, but I was also forging relationships with researchers, academics, activists, students and residents in Manchester who were committed to taking climate action. This was also how I connected with Marion – one of the core team members and an overall amazing person – and we brainstormed ideas to boost student engagement in climate activism at the local level. We also agreed that the climate narrative did not adequately address the emotional aspect of living through the climate crisis, i.e. the anxieties, fears and worries we experience as we witness the transformation of our planet. These informal discussions eventually led to the idea of creating a handbook for students in Manchester which would serve as a guide for exploring climate grief and local activism.

As Marion and I made progress on writing and compiling resources for the Handbook, the CEM team asked me if I would like to join the core group. I didn’t think twice before accepting the offer, because my work at CEM was meaningful and important to me. Not only did I love to explore new ideas and connect with brilliant people working on environment and sustainability, but I also had the freedom to pursue my own interests and align it with CEM’s broader work. Creating the handbook with Marion gave me a chance to understand the psychological, emotional and mental health impacts of the climate crisis, while also compiling resources that may be helpful for students.

This project has made me realise that my main priority at CEM would be to find and devise ways to engage more students in local activism. I aim to create spaces for conversations around climate grief, to spread word of CEM’s work, and to ultimately build and sustain a network of students committed to climate activism. In the coming months, I am also excited to collect more signatures for our petition to set up a Seventh Scrutiny Committee on Climate Change, and to bring in more people to join our Petition Task Force.

The best part about being a core team member at CEM is that I am constantly learning about climate politics, acquiring new skills, and connecting with people. In my seven-ish years of volunteering and activism, the most important lesson I’ve learnt is that persistence is key.  Climate activism can be exhausting and demoralising work, which is why many activists tend to burn out quickly and many movements cease to exist before accomplishing their goals. For this reason, it’s really important to maintain individual and collective morale. That’s why I think it’s essential to be a part of a group that looks out for each other, explores bold ideas and learns from past mistakes. And I’m incredibly lucky to have found a brilliant support system in the CEM core group.

1 thought on “Now we are six: Pooja Kishinani on Bangaolore, joining @ClimateEmergMcr core group and “what next””