The people in charge of Manchester’s climate emergency response seem to be living in a parallel universe. The Council and the city are failing to take bold action to reduce our emissions and prepare for the enormous changes an overheating world will bring. For example, Manchester as a city has used a quarter of its science-based “carbon budget” for the rest of the 21st century in … the last two years.

You probably knew about this retreat from reality by our “leaders” before you started reading our posts, or within … (checks notes)…  30 seconds of seeing our site.

Some of will you know we have set up a petition calling for the creation of a scrutiny committee dedicated to climate change.  Anybody who lives, works or studies within Manchester City Council’s boundaries can sign it.  Absolutely anybody can share it with folks who are able to sign it…

A seventh scrutiny committee is NOT a magic bullet. It is however a necessary small part of getting us all back to where most of us reluctantly live – the real world, where there are consequences for actions and inactions. 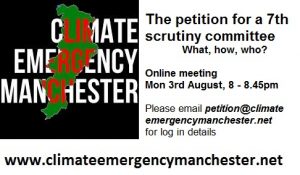 This coming Monday, 3rd of August, CEM is holding an online meeting (50 minutes or so, certainly less than an hour).  Email us on petition@climateemergencymanchester.net for the login.  The purpose is to

We want to know about

If you have ideas but can’t come, please SEND US your ideas as soon as you can – petition@climateemergencymanchester.net

We’ve set up an event on Facebook too.  Please share this post and that with anyone who is concerned about climate change and local action on it.