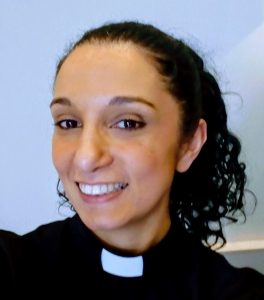 The latest Manchester person who has kindly agreed to an email interview is Rev. Grace Thomas.

Tell us a bit about yourself – where were you born, schooled, what jobs you’ve done, what you’re doing now?

I am priest in the Church of England, currently serving in Moss Side and Whalley Range, in Manchester. I have always lived in the North West (apart from a 2-year excursion further north to Durham!) having been born and raised in Marple, which is a town near Stockport. My mother was Welsh and my father was Indian. At the age of sixteen, I moved out of the family home and started working as a care assistant. I had my first child at the age of 18 and undertook my undergraduate degree in Nursing Studies as a single, teenage mum, which, shall we say, was rather challenging! I spent over a decade in nursing, with particular interests in research and women’s health, completing an MA in Healthcare Ethics and Law which had a focus on the ethical ramifications of criminalising HIV transmission. I left nursing in 2012 as I felt a strong calling to serve within the church, and, after a few years in youth and childrens work in various capacities, I was ordained into the Church of England in 2018, completing an MA in Theology which focussed on female clergy wellbeing.

I have strong interests in social justice, inclusion and belonging and care for creation, which encompasses care for self, neighbour and the world. These interests are what shape my current ministry.

How/when did you become aware of our climate and ecological predicament?

This is where my frustration starts to manifest itself! I remember being in high school in the early 90s and leading assemblies based on the work that Friends of the Earth were doing back then, highlighting the climate catastrophe that was potentially on the horizon. We have known about this for decades.

The environment “movement” is crushingly white, and Manchester is no exception to that. What do you think the underlying reasons for that are, whose responsibility is it to fix that (we think it’s white people’s, but you may have a different view) and what needs to be done?

This is a huge question that I will not be able to give full justice to. But it is a vitally important question that reveals the depth of the systemic and institutional racism that exists within countries such as the UK and USA. The resurgence into the public eye of the Black Lives Matter campaign this year (it has been around in its current form for seven years and stands on the shoulders of countless movements previous to this) has highlighted once again how deeply entrenched white power and privilege is. For example, activists and academics such as Elizabeth Yeampierre and Anthony Reddie trace back to the enslavement of black people in discussions of race and climate.[1]  Yeampierre shows how the incessant exploitation of natural resources, the taking of land for expansion and extraction, and the framework of capitalism, that has had huge ramifications for our ecology, has been at the expense of black and brown people throughout the world. I am not an economist, so my knowledge in this area is limited, but it’s pretty clear that capitalism values the production of material goods over the health and well-being of workers, facilitating exploitation of people in terms of low pay, which consistently disproportionately affects black and brown people. All of this is a long way of saying that whilst racism is not the root cause, its presence has undoubtedly contributed to the current climate emergency and we need to acknowledge this first.

How does this play out? Well, black and brown people are already hugely disenfranchised in society and struggle to get our voices heard in many arenas. For example, within the Church of England, there are countless examples of institutional racism which are highlighted very eloquently in a recent book, Ghost Ship, by Rev. Azariah France-Williams, a priest in Hulme. This takes many forms, and there is a huge fatigue amongst those affected, including myself, about having to continuously raise these issues of justice. Why does it always seem to be left up to the oppressed to challenge and reform the system? When the current Extinction Rebellion movement took hold, its leadership was white. This undoubtedly contributed to some unfortunate expressions of white privilege – such as the discussions about being arrested and talking about the police as our allies and friends. This is a very different conversation to the one many people from Black, Asian and minority ethnic backgrounds have to have.

Many fantastic environment campaigners talk very passionately about doing this for the future, for our children and grandchildren. This however belies, once again, the whiteness and ‘Westerness’ of this movement. The climate emergency is happening right now. People are being displaced, pushed into poverty, and deeply affected by the devastating effects of climate breakdown right now. Yet, this is manly in the global south and disproportionately affects African, Asian and South American people and so, to the white West it largely goes unseen and unacknowledged. The language of our campaigning needs to change to reflect the reality.

You are right, I think, the whiteness of the movement has to be acknowledged and addressed by white people first. There needs to be lament and humility in this. There needs to be true commitment to listening without defensiveness and with acknowledgement of privilege. There are many people from diverse backgrounds speaking out about climate justice who need to be listened to. It is not about the current movements ‘giving them a platform’, which conveys power in owning the platform, but rather seeking to ask whether the current movements can be granted time and space to hear what people from diverse ethnic backgrounds and have to say.

Coming “out” of COVID-19 is going to present huge challenges. There are so many people who have lost so much, without the normal mourning/grief to support them. There are enormous political and economic impacts as well as the spiritual and emotional ones. What does good allyship look like, in your opinion, in such times?  What, concretely, in the next 3 to 6 months, would you like to see progressive civil society organisations doing in (Greater) Manchester?

I think we firstly need to acknowledge that the pandemic is still ongoing and will be a presence for a while to come, so planning, at the moment, needs to very much incorporate this reality. You are right, there is much grief and loss to process. In the communities where I serve, many people have lost their lives to Covid-19, and many more have been working on the frontline, witnessing first-hand the pain and loss of the pandemic. As a minister, my role is to simply offer a place for mourning, for listening, for comfort and sanctuary. To walk alongside people in their context and be their companion.

In the immediate future, what I would like to see is a firm recognition that, as the pandemic has demonstrated so vividly, we depend very much on each other, and that we have a collective responsibility for our wellbeing and the wellbeing of the planet. One very simple thing I noticed, in the emergence of ‘pop up’ cycle lanes were how they came to abrupt ends at boundaries. If we can’t begin to act collaboratively across boundaries in Greater Manchester to enable us to build back better and greener, recognising that the climate emergency and the virus will not respect boundaries, then what chance do we really have? I find myself, in trying to get my head around all the ramifications of this global pandemic, unable to really plan and process too far ahead. However, all I can say to this is that any plans we make as organisations need to be made in the context of the wider community within which we serve.

How do we hugely accelerate the necessary transformation to our society – which actors do you think need to “put the bell on the cat”?

The pandemic has shown us that society can act swiftly in the face of an emergency. However, we don’t seem to recognise the catastrophe that lies before us. It needs to be acknowledged that we are in a climate emergency, in the midst of the sixth mass extinction. Language about ‘change’ must be discarded as it does not convey the urgency of the situation. Speaking as a person of faith, I believe I have a responsibility to not only speak out about the destruction of this world, but also act with integrity and intent –  ‘faith without works is dead’ is a biblical message which I take very seriously. I take my lead from people like Elizabeth Yeampierre, Greta Thunberg and many others who have been the prophets of our time, speaking truth to power and raising the consciousness of many. However, in my heart of hearts, I fear that, whilst we are trapped within an economic system that continually places wealth of some over health (in its widest sense) of all, true and radical transformation is far from our grasp. People of privilege will only deal with the situation when it impacts them directly, and by then it will be too late.

This seems bleak, but my faith gives me hope in the sense that I believe in something bigger than what we can see or comprehend. I see, every day, acts of kindness and humanity that reveal a deeper sense of life and hope than the one we see day after day on the news. I don’t know what the future of this planet will be, but I know that life will go on in some form. So, today, and in the days that lead from this, I try, in my very small way, to live by the mantra of a very famous theologian – do all the good you can, by all the means you can, in all the ways you can, in all the places you can, at all the times you can, to all the people you can, as long as ever you can.[2] What more can any of us do?

Standard disclaimer we put on all interviews: “The views of interviewees on the CEM website do not necessarily reflect the views of CEM.”