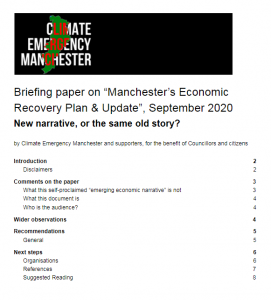 This Thursday (3rd September) a short report about Manchester’s economic recovery will be discussed by elected members of the City Council. It is not a good report, and a group of environmental and social justice campaigners have come together to challenge it and the deeper narrative of a “return to normal”.

The report, which claims to be part of a “new economic narrative” will be discussed by the Economy Scrutiny Committee of the Council.  There are six scrutiny committees, which are supposed to act as a watchdog and a sounding board, making sure that the 10 member Executive is not making horrendous mistakes, over and over.  The report will be accompanied by a presentation, which members of the public will be able to watch as well (the entire meeting is online only).

Over the weekend, members of Climate Emergency Manchester, Steady State Manchester and the Green New Deal podcast collaborated on a briefing paper (see as word document and as pdf)  about this report.

Why? Because we need to challenge the assumption that some sort of “return to normal” is possible, desirable or even ethical.  We as a city desperately need fresh thinking, not a re-run of old tactics which might have been ‘fit for purpose’ in the 1990s, but are long past their useful life.

The briefing paper critiques what the elected councillors will be presented with, and asks them to

There are also recommendations for the Executive and for citizens and groups.

b) please write to any of the 10 councillors on the Economy Scrutiny Committee whom you know, or whom represent you, explaining that you’d like them to ask searching questions this Thursday about the so-called “new economic narrative.”  You can find out their names and emails here