The Manchester Evening News letters page today carries three letters about climate change.  There’s been an ongoing exchange between a couple of people who deny climate change (while denying they are deniers, obvs) and other folks (including CEM core group members).

Today sees three letters – one from Sam Darby of Burnage Green Party, one from “Rebel Sympathiser” and one from Marc Hudson of the core group of CEM. The first is a robust defence of Green Party electoral successes. The second and third tackle the thorny questions of what IS representative democracy- and both mention a certain petition that regular readers of this website may possibly have heard of. You know, the one for a seventh scrutiny committee that would tackle climate change, the one anyone who lives, works or studies withiin Manchester City Council’s boundaries can sign…

Here you go… (and as someone tweeted yesterday in a frankly embarrassing communication, “drumroll please…” 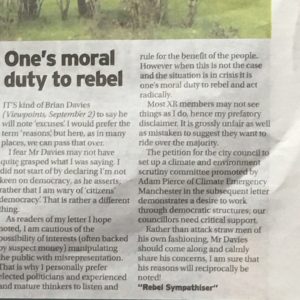 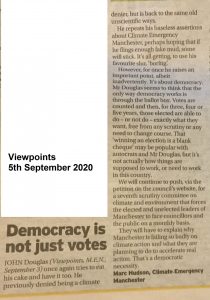 John Douglas (Viewpoints, M.E.N., September 3) once again tries to eat his cake and have it too. He previously denied being a climate denier, but is back to the same old unscientific ways. He repeats his baseless assertions about Climate Emergency Manchester, perhaps hoping that if he flings enough fake mud, some will stick. It’s all getting, to use his favourite slur, “boring.”

However, for once he raises an important point, albeit inadvertently. It’s about democracy. Mr Douglas seems to think that the only way democracy works is through the ballot box. Votes are counted (or, in some parts of Manchester, weighed) and then, for 3, 4 or 5 years, those elected are able to do – or not do – exactly what they want, free from any scrutiny or any need to change course.  That “winning an election is a blank cheque” may be popular with autocrats and Mr Douglas, but it’s not actually how things are supposed to work, or need to work in this country.

We will continue to push, via the petition on the Council’s website, for a seventh scrutiny committee on climate and environment that forces the elected and unelected leaders of Manchester to face councillors and the public on a monthly basis. They will have to explain why Manchester is failing so badly on climate action and what they are planning to do to accelerate real action. That’s a democratic necessity.