If you live, work or study within Manchester City Council’s boundaries, please sign and share the petition for a seventh scrutiny committee (for climate) mentioned in the letter below. 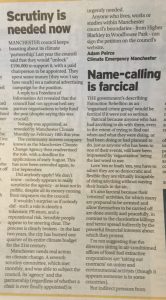 Manchester City Council keeps boasting about its climate “partnership”.  Last year the Council said that they would “unlock” £196,000 to support it, with a paid chairperson to be appointed. They spent some money (they won’t say how much) on a national advertising campaign for the position. A reply to a Freedom of Information Act revealed that the Council had not approached any partner organisations to help fund the post (despite saying this was crucial).

Nobody was appointed, as revealed by Manchester Climate Monthly on February 18th this year.

The community interest company known as the Manchester Climate Change Agency then readvertised the role, with a deadline for applications of early August. This has now been extended again, to 21st September.

Did anybody apply? We don’t know – nobody appears to really scrutinise the Agency – at least not in public, despite all its money coming from taxpayers via the Council.

It wouldn’t surprise us if nobody did – such a role is clearly a tokenistic PR stunt, and a reputational risk. Sensible people appear to be steering clear. The process is clearly broken – in the last two years, the city has burned one quarter of its entire climate budget for the 21st century.
Manchester needs real action on climate change. A seventh scrutiny committee, which met monthly, and was able to subject the Council, its “Agency” and the Partnership (regardless of whether a chair is ever finally appointed) is urgently needed. Anyone who lives, works or studies within Manchester City Council’s boundaries – from Higher Blackley to Woodhouse Park – can sign the petition on the Council’s website.