Regular readers of the Climate Emergency Manchester website may possibly have noticed our campaign to get 4000 signatures on  petition for a seventh scrutiny committee, dedicated to climate change.

Every time we hit a milestone in our efforts, we’re going to publish an interview with someone who has signed and is helping to collect more signatures.  Now that we have 700 online signatures (to accompany over 700 on paper), we are turning to Beckie Walker.

Who are you, what do you do, why did you sign the petition? 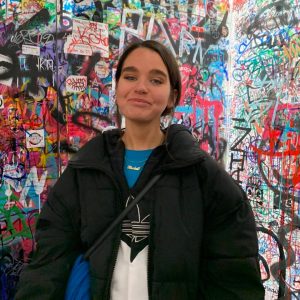 My name is Beckie Walker, I’m 21 years old and from Darlington in the North East of England. I am a final year Politics and German student at the University of Manchester and work part-time at a bar in the city centre. I find it difficult to express my anger towards the Global North’s response to climate change, but I believe it is paramount that the council implements policies to elevate the crisis. If this is successful at a local level, it will hopefully set a precedent and example for national government to follow.

Have you tried to get other folks to sign yet? If so, how, and how did that go?

As well as putting out a general plea on social media, I have sent messages and a link to the petition to my housemates, course mates and other people I know in Manchester. I am also hoping to speak with some people in real life (socially distanced of course) and hand out some flyers with all the important information!

If Manchester City Council DOES set up a permanent ‘Climate and Environment Scrutiny Committee’ what should its first actions afterwards be?

The climate crisis is extremely multi-faceted, completely ubiquitous and will continue to have a profound impact on all aspects of life. Obviously, climate change is a global issue and requires a global response. However, we are yet to see a national government or international agreement which acts boldly enough and in accordance with the scale of the problem.

So, Manchester needs to take matters into their own hands. Climate initiatives need to be properly implemented and funded. The proposed committee needs to work with specialists to seek their advice; and strongly scrutinise the way in which the council fulfils their promises. If MCC believes the problem constitutes the declaration of an emergency, it also constitutes the need for profound change.

How do you think citizens could/should act to make sure that such a declaration is followed up with actual actions? What skills and knowledge are needed for that?​

Firstly, education is paramount. People need to be aware of the situation we are in and the problems it is causing as a consequence. Poverty and injustices will run rife if we do not tackle the climate crisis with a bold agenda. Voting is a powerful tool, but we need to make sure those we elect are held to account. It is useless to make cavalier, empty statements which do not follow through.

Unfortunately, despite increasing awareness, the climate crisis continues to persist on an unabated scale. The crisis has ultimately developed as a result of a world system that lacks any compassion and has greed at its core. It will continue to expose deep-rooted inequalities and exacerbate our natural resources if we don’t act now.

I truly believe that Manchester is a unique, strong-willed city with a lot of potential and pride. The city also has an admirable sense of ‘togetherness’. Its determination to fight injustice can be seen through the impeccable work that CEM are carrying out. The next step is to fully mobilise the people and demand better.

We are shocked that @ManCityCouncil is planning to make the Levy & Burnage Active Neighbourhood scheme even more hostile for pedestrians and cyclists.

The climate crisis and the cost of living crisis share the same capitalist roots. Good turnout today at the Enough is Enough/Don’t Pay rally today and it’s great to see the climate emergency is being mentioned in most speeches