CEM Researcher Ellen Bassam explains why the US-UK trade deal matters for climate, democracy and so much more.

Today marks Global Justice Now’s day of action, campaigning against the dangers of the US-UK post-Brexit trade deal. These dangers, if not challenged, will define the UK’s trading approach to major issues such as climate justice and healthcare, whilst also undermining the foundations of democracy and accountability. Our toxic infatuation with Brexit and its many strings attached trade deals may have worn off, but behind closed doors the deals negotiated will impact the future of trade for decades. 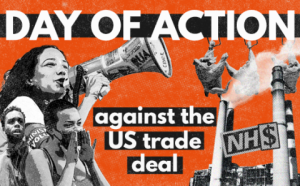 standards here in the UK. The US desire for ‘comprehensive’ access to UK markets would allow the likes of the well-known and widely disliked chlorine-washed chicken and antibiotic pumped beef into our supermarkets. Dosage allowance rates of antibiotics in the US are up to 16 times higher than in the UK, it is also three times higher for chickens and double for pigs. The effect of this: increased human resistance to antibiotics. Helpful, during a global health pandemic. The US also hopes for full market access to the NHS and its many possible contractual opportunities, paving the way for privatisation of our beloved institution.

The neoliberal argument here is that it gives the consumer ‘choice’. This choice is, however, a convoluted term. Choice is only available to those who have the means to choose. The government should be promoting measures that make sustainable and healthy choices easier, rather than increasing harm by driving down standards. It allows the capitalist-charm of a cheaper option to win, presenting a faux good deal to those without the means to spend more.

In terms of the climate, the current (non-existent) US approach to the crisis will inform how the issue is treated at the negotiating table. We are at a point where the UK’s ambitions climate targets are meaningless without concrete implementation plans, and it is areas such as trade deals where it should be front and centre. Instead, the deal looks to favour large corporations, even allowing for them to sue nation states should they lose profits due to environmental legislation. This is just one of many potential losses for the climate in this trade deal.

What is worse is much of this is being done without effective scrutiny. The Trade Bill, currently in the committee stage in Parliament, makes no mention of parliamentary scrutiny. Parliament will have no legal right to debate or vote on a trade deal agreed. Equally, neither Scotland, Wales or Northern Ireland have any formal role in the negotiation or ratification of treaties. Scrutiny is something Climate Emergency Manchester sees as fundamental to any effective policy making in order to reflect the will of those it is meant to protect and benefit. Those in power must be held accountable to their actions.

Please sign Global Justice Now’s petition and join their day of action today. Details on how to get involved are here.