Today marks ten years since the first “Stakeholder Conference on Climate Change” in Manchester (see accounts here and here). Marc Hudson, writing in a  personal capacity, reflects on what has (not) happened in the last ten years and what needs to happen next.

The attempts to get a climate policy going for Manchester City Council and Manchester more broadly had begun in the mid-2000s (1) when Neil Swannick was Executive Member for the Environment (the second person, and still the smartest and most effective, to fill the role – admittedly without much competition).  Swannick’s last gasp as Environment Exec was to get a “17 principles of climate change document”. Among other things, it promised a stakeholder process and a completed policy by the end of the year.

At the beginning of 2009 a truly laughable and laughably expensive document (the Council had paid a London-based consultancy to do it) emerged – The “Call to Action.” It was so piss-poor that a bunch of activists (including the author of this post) created a “Call to Real Action” document.

The Council – for reasons of its own – listened a bit, and by the end of the year a not-terrible Climate Change Action Plan was agreed by the Council. It included two headline goals – a 41% reduction target for the city by 2020, and the creation of a “low carbon culture” by 2020.  To guide this all, a “Steering Group” was created, that was supposed to be a critical friend/watchdog on the Council and other groups. It was supposed to have some members elected at an annual day-long stakeholder conference.

The following year, 2010, was one long slog to try to get the “Steering Group” to actually do anything. Finally a conference date was set.   Fringe events organised by Manchester Climate Fortnightly and its allies (i.e. the author of this post) happened. The first conference (and only day-long one)  was held at the Museum of Science and Industry and was the usual top-down happy-clappy bullshit that studiously avoided the question of aviation emissions (thus the protestors with their elephant.) 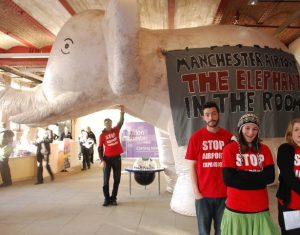 The elections that were supposed to happen…. didn’t.

The grossly incompetent “steering group” couldn’t get its shit together at all in 2011 when rallying people and maintaining morale and momentum was urgently needed.   Just grossly, grotesquely incompetent.

In  early 2012 a half-day “conference” was finally cobbled together. It was – as you’d expect – the usual vague greenwash and holding-hands-and-singing kumbaya.  Promises of elections to the Steering Group were made. And never kept.

A final half-day joke “conference” was held in  2013, before the second (unelected) chair of the Steering Group unilaterally abolished the conferences, saying the group lacked capacity to stage it (that’s true).

Since then, the “Steering Group” (replaced in 2015 by a community-interest company with the grand name the “Manchester Climate Change Agency” – same muppetry)  has held an Annual General Meeting: ninety minutes of depressing speeches by the great and the good, and questions that are never quite answered.  Recently, they’ve started calling these AGMs “conferences.”

The latest event, in July, was a new nadir.  You can read about it here.

This history matters because we need to understand that the people who have had ten years in charge of Manchester’s official climate response have had TEN YEARS to get it right.

There is no low carbon culture (the very idea of it has been forgotten).

There is no admission of the long horrible failure, (in part perhaps because there are no now-departed people to be blamed), and therefore no ability to learn from it.

There has been no effort to engage all those hard-to-reach communities in ongoing dialogues. If we had had 10 more day-long conferences after the first one, by now there might – might – be all sorts of groups in Harpurhey, Sharston “etc” aware of what the Council and other actors were and were not doing, applying pressure, offering support, pitching in ideas.  This would of course be terrifying to the people in charge, who clearly want nothing more than a carefully chosen claque…

What has to happen next

In normal circumstances, I’d be advocating for citizens groups in Manchester to organise their own conference(s)/gatherings (2).

But I should co-co….  As in, there are two reasons why trying to convene groups and individuals in 2021 is going to be difficult (3).

Coronavirus means things will have to be online. That sucks

COP26 (the idiocy in Glasgow) is going to soak up far too much attention and intention. All talk of building networks will be met with “but that’s what we are doing now, comrade” (by telling people they should get on a coach to another city).  And post-Glasgow, there will, in all likelihood, be further demoralisation and fragmentation.

So, you know, I don’t know. I think we have to do it differently. We can’t rely on big conference style events to find new folks, to be a site of exchanging ideas, information and boosting morale.

(1) The “Local Agenda 21” process had been more broad than climate. And had been thrown down the memory hole when citizens had the temerity to suggestion a tax on aviation…

(2) Truth be told, this has been tried before, and has failed repeatedly; failure isn’t necessarily bad, but the lack of ability to learn anything is.

2 thoughts on “The 2010 Stakeholder conference: commemorating a decade of #climate inaction in #Manchester”