In July 2019 all 96 councillors voted to declare a climate emergency, with a long list of specific things that had to happen (they haven’t).

In February 2020 (i.e. about 15 years ago), Climate Emergency Manchester started a petition calling for a seventh scrutiny committee, because the lack of action on climate change was not getting examined.

In July 2020 it was announced (buried in the middle of a glossy feel-good bullshit document) that the city of Manchester has burned through one quarter of its carbon budget for the entire 21st century in the last two years.

Since then, then, there have been meetings of the Neighbourhoods and Environment Scrutiny Committee in September, October, November and now below you can see the agenda for December’s meeting.

Climate change, the climate emergency, the blowing of the carbon budget as received zero scrutiny.  Maybe that is what the Council means by “net zero”? 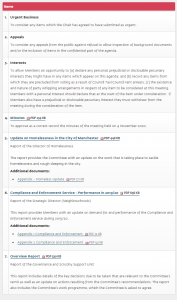 We’d like to say this can’t go on. But without a fundamental and radical shift, it will. It has been this way for over ten years on climate policy in Manchester.  What is needed is a bigger, better effort by citizens to change it.  If you want to help in Climate Emergency Manchester’s work as part of that effort, please email us on contact@climateemergencymanchester.net

You might also want to talk to your friends and neighbours about this. And contact your councillors and ask them if they are proud of the Council’s performance.